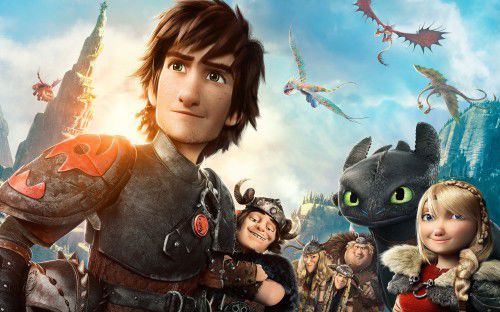 THE original award-winning “How To Train Your Dragon” (2010) had a charming innocence but I’m always leery of sequels.

Canada-born, Irish-trained animator Dean DeBlois has fallen into the trap of imitation. The result here tells the same story as a plethora of mostly live action films in which the good guys confront a bigger, nastier, better-equipped foe seeking to control the world. It’s been done before and it’s getting stale.

On the icy island of Berk, Stoick (voiced by Gerard Butler with a contorted Scottish accent) benignly rules a Viking community. Stoick’s son Hiccup (Jay Baruchel) and his pet dragon Toothless win regularly at the dragon races. In another kingdom, Valka (Cate Blanchett) cares for sick, injured and orphaned dragons. And further out, Drago (Djimon Hounsou) is buying up dragons and training them to fight.

The film is well supplied with fanciful and generally charming dragons blessed with flight capability. One that isn’t is the Alpha, Drago’s secret weapon, an aerodynamically-impossible behemoth whose appearance suggests that his mama mated with a mastodon.

The attraction of this same-old same-old story-telling soon palled. But small fry easily impressed by brightly-coloured movement and not yet conditioned by grown-up notions of good and evil may well find it acceptable.