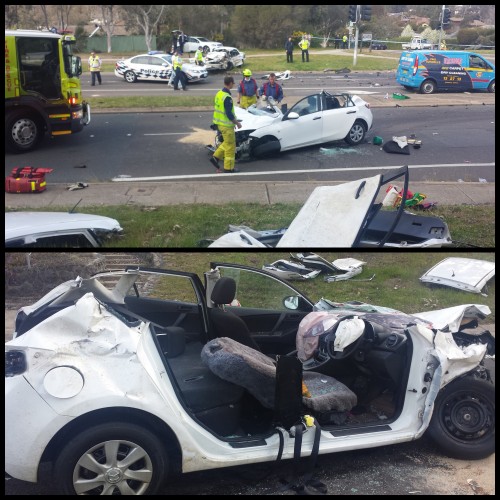 About 2pm, an unmarked K9 Team Patrol activated warning lights and sirens on William Hovell Drive near the intersection with Bindubi Street, Aranda. The driver of the Toyota came to a stop at the side of the road. After the police member exited his patrol vehicle, the driver accelerated away and turned right into Bindubi Street. The patrol member returned to his unmarked K9 patrol and attempted to follow the Toyota but remained some distance behind due to being caught in heavy traffic

A short time later, the driver entered the intersection of Bindubi Street and Lyttleton Crescent against a red traffic light and collided with a white Mazda 3.

ACT Ambulance Service attended the scene and treated the male driver of the Toyota Camry for serious leg and head injuries and the female driver of the Mazda 3 for minor injuries. Both drivers were transported to The Canberra Hospital for treatment.

Both drivers were the sole occupants of their respective vehicles.

ACT Policing’s Collision Investigations and Reconstruction Team attended the incident and an investigation is ongoing.

Police are urging anyone who witnessed the collision itself or events leading up to the collision, and have not yet spoken to police, to contact Crime Stoppers on 1800 333 000, or via www.act.crimestoppers.com.au. Information can be provided anonymously.