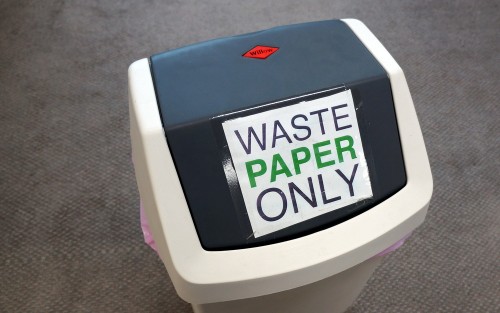 SHANE Rattenbury has launched a “Recycling – don’t bag it!” campaign which is intended to reduce the amount of bagged household recycling that ends up at the recycling facility.

“Recycling tied in plastic bags cannot be processed at the ACT’s Material Recycling Facility (MRF) and sadly has to go to landfill instead” Mr Rattenbury said.

“Recycling in plastic bags ends up in landfill rather than being recycled as it is considered contaminated given the contents are unknown. Our recycling contractor, REMONDIS, estimates that 200 bags of recycling go down the conveyor belt every hour.

“This campaign aims to educate the Canberra community to change recycling habits of residents and reduce the amount of bagged recycling arriving at the MRF.

“There will also be community education opportunities at shopping centres, playgroups and universities.

“I encourage all Canberrans get on board with the ‘Recycling – don’t bag it!’ campaign and to think twice before putting their recycling in a plastic bag.

There is a for more information on what can and can’t be recycled and other community programs which support recycling in the ACT.

CityNews - November 26, 2020
0
From 9am on Wednesday (December 2) venues will be allowed double as many people, according to ACT chief health officer Dr Kerryn Coleman. But there's a catch.