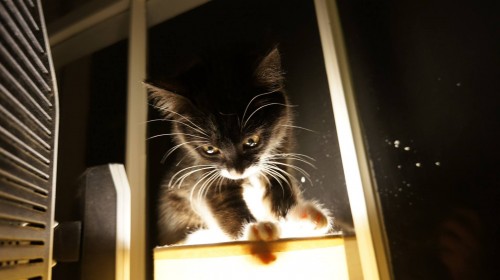 SHANE Rattenbury and the Conservation Council ACT are reminding people living in cat containment areas of their requirements for protecting cats and nearby native wildlife.

“One of Canberra’s great assets is the bushland that surrounds its suburbs and the abundance of birds and animals that call it home,” Shane said.

“Our close proximity to this bushland means roaming domestic cats are a serious threat to native wildlife, with an ACT study showing cats were responsible for hunting, both day and night, and killing a variety of species of birds and animals.

“Cat containment areas are in place in some of Canberra’s newer residential areas where domestic cats pose a high risk to native wildlife, including Bonner, Coombs, Crace, Denman Prospect, Forde, Lawson, Molonglo, The Fair at Watson and Wright.

“It is the responsibility of cat owners living in these areas to keep cats confined to their properties at all times. This can be easily achieved by keeping cats inside the house or creating a purpose built enclosure.

“Under legislation, cats found roaming in containment areas can be seized by TAMS rangers and an infringement notice issued to the cat’s keeper or carer,” Mr Rattenbury said.

The ACT Conservation Council has begun a letterbox drop of nearly 70,000 households as part of a community campaign encouraging cat containment. The campaign targets suburbs that are hot spots for domestic cat predation due to their close proximity to important habitat for species which are vulnerable to cat attacks.

“Our message is very simple – it is possible to love your cat and love wildlife too. Preventing your cat from roaming doesn’t just protect our native birds, lizards and frogs, it also improves the welfare of your cat and benefits the community at large,” Briony Papps, Assistant Director, Conservation Council ACT.

Based on an ACT study of cats, the Conservation Council estimates that domestic cats might be killing between 380,000 – 630,000 animals annually.