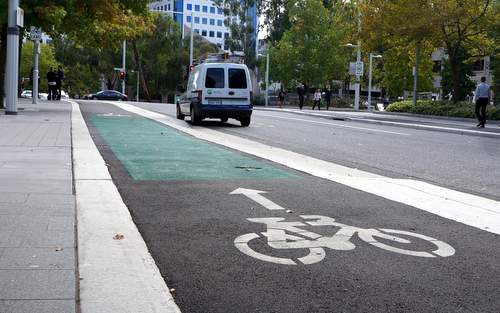 “Separating cyclists from traffic is one of the best things we can do to help protect cyclists from other traffic, and to encourage less confident cyclists to try riding. We want Canberra to be a city that embraces sustainable and active transport such as cycling and it’s important to continually improve our infrastructure,” said Shane.

“From now until April 2015, four new devices will be trialled at six locations across Canberra where the separation between on-road cyclists and motorists could be improved.

They’re useful for retrofitting in areas where more solid separation is difficult.

“Different devices, ranging from tactile line marking to raised mountable kerbing, will be installed to help identify the edge lines of the cycleway and maximise the separation between cyclists and adjacent traffic.”

The four trials are:

“I’m looking forward to seeing the outcome of this trial and the possible rollout of more separation devices to help people of all ages and abilities take advantage of cycling in Canberra,” Shane said.