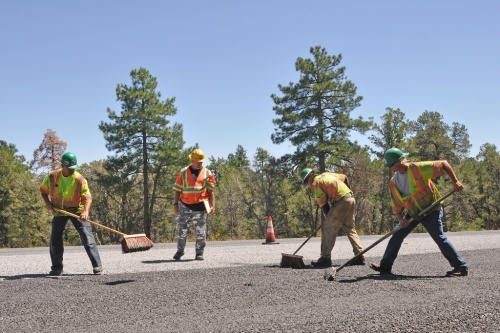 FEW things excite Canberrans as much as chip seal on roads.

No matter their positions on cycling or public art nearly all can come together in their hatred of loose stones being dumped on the road.

The ACT Government continues with the unpopular road surface simply because it is massively cheaper than re-asphalting.

Today Shane Rattenbury has announced a trial of a new microsurfacing, or slurry seal, technique which promises to be cheap while producing a less noisy surface than chip seal.

“Earlier this month Roads ACT used microsurfacing – or slurry seal – on Bowen Drive in Barton. Slurry has been used for the last few years to resurface shared paths in Canberra as it provides a smooth surface,” Mr Rattenbury said.

“Unlike other types of resurfacing treatments, the slurry is blended cold and laid on-site by specialised machines to produce a less textured, lower noise surface.

“Following concerns about traffic noise by residents near Bowen Drive, Roads ACT trialled the use of slurry. As slurry does not provide extra structural strength and isn’t waterproof, it was applied to an existing reseal. This combined solution utilised the safety and structural benefits of reseal, while also providing the smooth surface of the slurry. It was also undertaken for less than half the price of an asphalt resurfacing.”

With chip seal coming in at a fifth of the price of asphalt don’t expect it to disappear entirely, but Shane says the slurry technique will be trialled further.

“Roads ACT will now monitor the use of this combined slurry and reseal technique to see if it can be utilised elsewhere in the ACT,” he said.