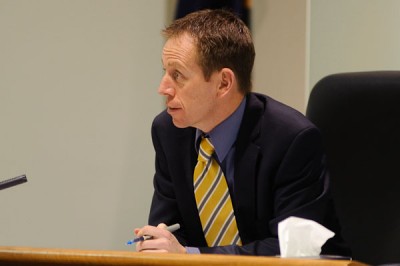 “There have been over 819 boardings on the flexible bus service since it commenced on 1 September 2014 and its expansion into Tuggeranong suburbs including, but not limited to, Kambah, Wanniassa, Isabella Plains, Gordon and Banks will allow more people to use the service,” Shane said.

“Designed specifically for residents such as the aged and people with disabilities, the flexible bus service is a free service which operates off a basic timetable, picking up residents from their home and taking them to local community facilities such as local shopping centres and hospitals. Each bus is wheelchair accessible and is operated by a member of the Special Needs Transport team.

“The new Tuggeranong service, which was introduced in response to requests from residents for flexible transport options in the area, is currently running every Tuesday and Friday, picking up from the Hyperdome and Erindale Shopping Centre as well as the Canberra Hospital on request.”

“There have been regulars who have used the service every week since it started including the oldest traveller who is 93. People also book in to be transported to one-off appointments or recreational activities. Whatever the need or occasion, the flexible bus service is there to ensure transport disadvantaged Canberrans can travel conveniently during the day. Carers accompanying an eligible person and who hold a valid carer’s card are also permitted to travel.

“To make a booking, passengers can call the Centre on 6205 3555 from 9 am to 4 pm Monday to Friday or email flexiblebusservice@act.gov.au. Bookings must be made two days prior to travel. If a bus is full, an alternative option will be offered as the service is flexible by nature.”

Mr Rattenbury said the service is currently two months into a 12 month trial and will be reviewed before being funded further.

Information on the flexible transport service, including who is eligible, can be found at www.transport.act.gov.au