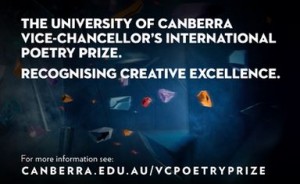 The winners of the inaugural University of Canberra Vice-Chancellor’s Poetry Prize have been announced, judged from 1,050 entries from over 600 poets, the winners are:

The competition, one of the most generous of its kind in the world with a $25,000 prize pool, invited writers to submit a previously unpublished poem, in English— translations were not eligible — and up to 50 lines in length.

Mr Gross said Mr Adès poem about poetry was “irresistible” and “a generous and subtle celebration of the way a poem can infiltrate itself, coming to fruition slowly, among the swarming details of a life observed with appetite.”

Vice-Chancellor Professor Stephen Parker described the quality of entries as “outstanding” and thanked all the poets who submitted their work to the inaugural edition of this prize.

“This competition celebrates the enduring significance of poetry to all cultures, and highlights our commitment to excellence in creative writing in its various forms.

“While most entries were written by Australian-based poets, submissions were also received from each continent, and from across the region, including Southeast Asia and the South Pacific.”

Professor Parker said it was also pleasing to see a significant number of entries (18 per cent) from students.

The prize is administered by the University’s International Poetry Studies Institute.

An anthology of the 58 longlisted poems titled Dazzled including the winner, runner-up and four shortlisted poems will be available as a free eBook here: www.canberra.edu.au/vcpoetryprize