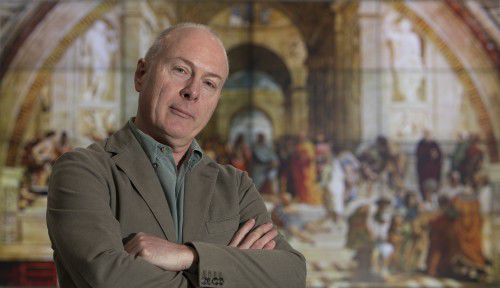 THE Head of the University of Canberra’s International Poetry Studies Institute, Dr Paul Hetherington, has won an $18,000 grant from the Literature Section of the Australia Council for the Arts for a residency at the BR Whiting Studio in Rome, to take place next year from 3 August 2015 – 29 January 2016.

He is one of just four Australian writers awarded six-month residencies in this round and the only one from the ACT.

Paul plans to use the residency to write 100-120 poems inspired by and incorporating visual imagery of hundreds of paintings and photographs held in Rome’s most famous art galleries, institutions and churches.

“History is inscribed all over Rome’s places and within its buildings. Its art collections are superb and the visual imagery associated with the city is extraordinarily rich, so it is the ideal location for this project,” Paul said.

Provisionally entitling his collection “Roman Paintings”, among others he plans to use prominent artworks like Caravaggio’s The Fortune Teller in the Capitoline Museums, Raphael’s The School of Athens in Vatican City, art from churches like the Sistine Chapel and work from the contemporary and newly opened MAXXI Museum.

Dr Hetherington also hopes to develop new links between Australian and international creative and cultural communities through this residency, making “an innovative contribution to Australian poetry.”

Paul is an internationally renowned and award-winning poet. He has produced eight full-length poetry books including his latest collection Six Different Windows, just shortlisted for the 2014 Western Australian Premier’s Book Awards. He represented Australia on the 2012 Australian Poetry Tour to Ireland, has twice been a finalist in the UK’s Aesthetica creative writing competition and was shortlisted for the 2013 Montreal International Poetry Prize and the 2013 Newcastle Poetry Prize. In 2002 he was the recipient of a Chief Minister’s ACT Creative Arts Fellowship.

He plans to incorporate insights gained on his residency into his teaching when he returns.

Sponsored Content - May 12, 2021
0
Success is a team effort, according to Mirko Milic, who is very proud of the car dealership teams he leads. This is a sponsored post.