IT was “once more until the breach, dear friends” at the Canberra Playhouse today as Bell Shakespeare Co gave media a brief glimpse of what is to come in their production of Henry V”. 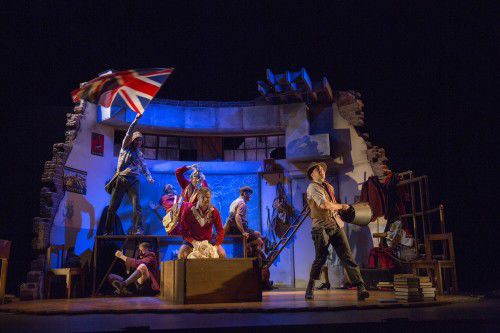 But wait on, wasn’t that the Battle of Agincourt, one of the greatest British military victories against the loathed French in 1415?

This looked more like the London Blitz, as a group of young people huddle up in an underground shelter to wait until it’s all over.

And that’s exactly what director Damien Ryan had in mind as he interpreted the Shakespeare text in light of modern battle.

Ryan was a teacher at Knox Grammar School in Sydney and is known to love the language of the Bard. In this, his first full show for Bell, he has entered Shakespeare’s text through a real-life story – in 1941, for 57 consecutive nights during the London Blitz, a group of boys trapped in a bunker rehearsed a new play each week and would then perform it for others in the shelter.

In the fiery opening lines of the play, “Oh for a Muse of fire,” a scholarly figure who could almost be Ryan himself picks up the text and begins to conjure up the battlefields of France in the most famous piece of pictorial language ever written.

Canberra theatrelovers are bound to find the excitement palpable, for as the bombs drop, the adrenalin moves up a notch or two until the boy carrying Henry’s part cries “God for Harry, England and St George” just before he sees all his friends blasted to smithereens.

The last bit is almost certainly Ryan speaking, not Shakespeare, whose “Henry V” is full of heroic rhetoric and just a little bit of skepticism.

Skeptics and Bardolaters alike should get along to this one.

Paul Costigan - April 14, 2021
0
"The Watson community is asking the bureaucracy, being the ACT Planning Directorate and the Suburban Land Agency, to listen and to alter how they work. Not much chance of that," writes "Canberra Matters" columnist PAUL COSTIGAN.