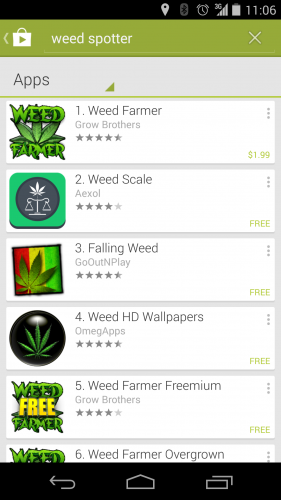 SIMON Corbell has triumphantly announced the release of a weed spotting app.

“Weed management in the ACT and regional communities will be easier with the launch of the ACT and Southern Tablelands Weed Spotter website and smartphone app,” Simon said.

“Combating noxious weeds is problematic all around Australia, but we now have another way to help weed them out,” Mr Corbell said while launching the new applications at the Atlas of Living Australia Science Symposium.

“The new online and smartphone applications allow Landcarers and ParkCarers, farmers and governments to upload information that helps document and map weeds and weed control efforts in the region onto a public, Google Maps based interface hosted by the Atlas of Living Australia website.

“I am particularly excited to launch this initiative from a partnership between governments and communities that have long been at the forefront of weed management in the ACT.

“The applications will both strengthen these partnerships and provide another formidable tool in combating the weed problem.

“As the ACT government moves towards a digital Canberra, initiatives such as the Weed Spotter applications are a fantastic example of how better data collection and management can improve the ACT environment and assist the Canberrans who care for it.”

The ACT government, through the Environment and Sustainable Development Directorate, funded the development of the applications.

The applications project has been a collaboration between The Atlas of Living Australia, ESDD, ACT Parks and Conservation Service, 10 NSW local government areas represented by Palerang Shire Council, the Molonglo, Southern ACT and Ginninderra catchment groups, Landcare and ParkCare volunteers, and the Conservation Council.

It all sounds rather exciting doesn’t it?

So your correspondent rushed to the Google Play store, searched for “Weed Spotter” and got the results you can see at the top of the screen. Rather a different sort of weed.

We asked Simon’s media advisor where to get it and were referred to an obscure web page which promised android and ios release at some point in the indeterminate future.

We went back and were promised it was already released for android.

We searched further and there it was many pages down as number 24! 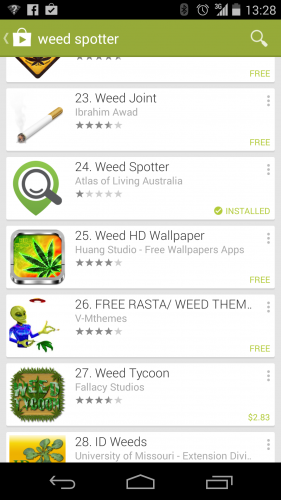 A download followed, then nought but a login screen.

We went back to the obscure website and found “Create a login” which we have done but now must wait on the approval of an administrator.

It may indeed be an app, but it doesn’t work like any I’ve ever used before.

It’s not quite “beware of the leopard”, but it’s very close.

CityNews - September 21, 2020
0
Every three-year-old child in Canberra will have access to one day a week of free early learning under a re-elected ACT Labor government, but not for a few years.