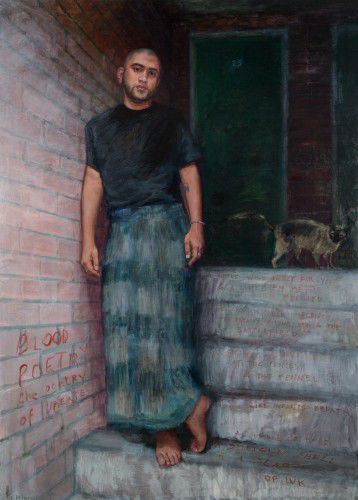 IT’S that time of year artists all over Australia are busy putting the finishing touches to their entries for the 2015 Archibald Prize.

While very few people expect to win the first prize of $100,000 most artists would be pleased to be selected for hanging, the Packing Room Prize valued at $1500 or the People’s Choice valued at $3,500.

The prize will be awarded, in the terms of the will of the late JF Archibald to the best portrait ‘preferentially of some man or woman distinguished in art, letters, science or politics, painted by any artist resident in Australasia during the 12 months preceding the date fixed by the Trustees for sending in the pictures.’

Among the Canberra region painters who have entered the prize this year is Hawaii-born artist, Kerry McInnis, who lives and works on a property on the Captain’s Flat Rd. She has been finalist in the Dobell Drawing Prize, the Salon des Refuses, the Waterhouse Art Prize and the Portia Geach Memorial Award and is represented by Wagner Gallery in Sydney.

In her portrait of local author Omar Musa she has captured his Malaysian-Australian heritage, his hometown Queanbeyan and his profile as a poet.

This year’s Archibald Prize runs at the Art Gallery of NSW from July 18 to September 27. The finalists are announced on July 9 and the announcement of winners on July 17.

Kerry McInnis has a website at kerrymcinnis.com
As does Omar at omarbinmusa.blogspot.com.au.

CityNews - April 2, 2020
0
Taxi drivers who lease their taxi plates from private owners will get a one-off payment of up to $5000, according to Chief Minister Andrew Barr.