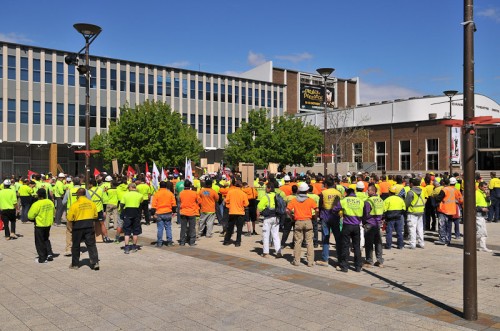 A senior CFMEU official is facing court after he reportedly refused to obey safety rules during a site visit. Fair Work Building and Construction (FWBC) is also alleging the official, Dean Hall – who is the Australian Capital Territory CFMEU State Secretary – disrupted a concrete pour and threatened to stop another one.

On a site in Franklin, ACT, Mr Hall allegedly told a concrete pump operator “stop pumping or I’ll make you lose your ticket!” As a direct result of this, the operator packed up the concrete pump and left the site. Mr Hall reportedly said to fellow organiser Johnny Lomax: “watch what happens when I stop their pour. There’s going to be a punch on here.” When a subcontractor said to Mr Lomax “You are just trying to stop my job”, Lomax allegedly replied: “It’s not about you mate. Ever since we started coming here these Village guys have had bad attitude and it needs to be fixed and they’ll get plenty of trouble when they start that Harrison site across the road as well”.

FWBC is also alleging that Mr Hall, Mr Kivalu, Mr O’Mara and Mr Smith failed to obey safety laws during site visits. Mr Hall told a senior manager who asked him to follow safety rules “…I have a permit to enter the site and it overrides your site rules”. When told to follow site safety rules, Mr Smith allegedly positioned his face centimetres from the site manager’s face, yelled “I’m here as a WH&S Officer! You can’t f***ing tell me what to do” and pointed his finger at the site manager.

FWBC have produced a media backgrounder on their action.