“AIDA” is an opera as much celebrated for its spectacle as for its music, making it the perfect opera for this now annual large scale outdoor staging. 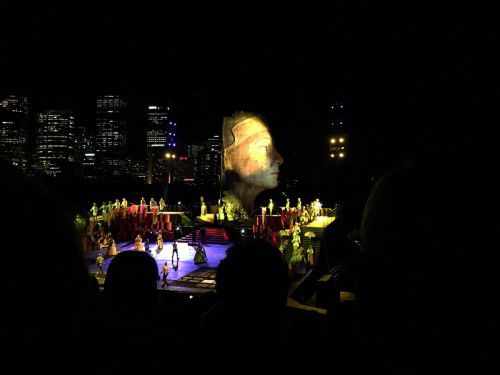 The composer Verdi was originally commissioned to write “Aida” by the khedive of Egypt to celebrate the opening of Cairo’s new Opera House in 1871. The opera lends itself to large-scale ritual and splendour. Opera Australia and director Gale Edwards gave it is this in full measure what I believe to be the most successful Handa Opera yet.

Edwards, who had when directing “Carmen” on the harbour in 2013 faced the difficulties attendant upon a more intimate opera, has used all her directorial skills to stage a mythic “Aida” in which the local patriotism of Egypt is pitched against the tormented nationalism of a subjugated people, in this case the proud Ethiopians, of whom the central character Aida is one.

Journalist Peter Greste might not recognise the physical appearance of this operatic Egypt, but he would certainly recognise the system of justice, which ultimately sees the dull but heroic General Radamès, (tenor Walter Fraccaro) condemned to entombment as a punishment for perceived treachery against the State. 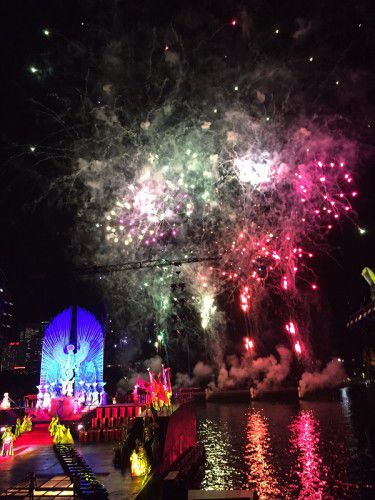 Set and costume designer Mark Thompson has also pulled out all the stops in representing Old Kingdom (sort of) Egypt by a huge, ruined head of Nefertiti, one capable of revolving as the action proceeds. Literalists hoping to see a real tomb ought to be satisfied by lighting designer Matt Scott’s focused, claustrophobic lighting for the tragic end.

Thompson’s costumes proved a talking point at the packed opening night, with a weirdly eclectic mix of golden Pharaonic costumes, fascist iconography, central African batik with a Caribbean twist and aristocratic European elegance for the ladies of the court.

It didn’t matter a toss that Edwards and Thompson had chosen such an eclectic approach. From the outset, the mode was visual sensation, with dancers seemingly appearing from some ancient papyrus to help recreate priestly spectacles, real camels replacing the elephants of tradition (there were large tusks borne by slaves) and the now-obligatory fireworks which came very briefly at the end of the Triumphal March, although a reprise of this incendiary climax was seen as patrons walked away from Mrs Macquarie’s Point, suggesting that not all had gone off on time.

In a clever moment of artistic understatement, the central point of the march was, however, the depositing of many, many black coffins in front of the King.

And so to the opera itself, the one which does not present any psychological depth, unless you count the rejected Princess Amneris’ (mezzosoprano Milijana Nikolic) suggestion to Radamès in Act I that his heart may have been touched by love. No, this is a simple triangle – heroic general loves the slave who turns out to be the Princess of Ethiopia (American soprano Latonia Moore).

Princess falls for general, but suspects his affections lie elsewhere. Tormented slave/Princess sees her own father Amonsaro among the captives and is torn between romantic love for the general and loyalty to her own people. Cunning high priest Ramfis connives to ensure that the general does not move up the pecking order. The catastrophic outcome is apparent from the outset.

Matching the grand story is grand music, conducted with sensitivity by Brian Castles-Onion and sung with passionate intensity by all the principals. The onstage vocal sparring between Aida and Amneris the high point of this drama and in my view, Moore’s Aida is at times edged off the stage by Nikolic, although they are worthy opponents.

The formidable chorus of Opera Australia, more blokey than usual, suffered at time from unbalanced sound.

Opera Australia’s director Lyndon Terracini says he is looking around for possible overseas locations for this magnificent production of “Aida”. Short of staging it on a mountain overlooking Rio de Janeiro, it is hard to see how the present setting could be equalled.