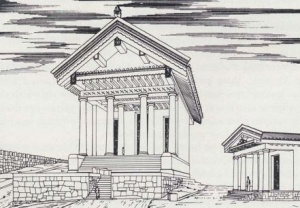 THE Friends of the ANU Classics Museum are inviting the public you to a lecture by Dr Lily Withycombe on the subject of “Augustus and the temple of Jupiter Feretrius”.

In the late 30s BC, the ancient city of Rome, still suffering from civil war, was apparently filled with decaying religious sites. One particular temple, dedicated to Jupiter Feretrius on the Capitoline hill, was allegedly in ruins. In a powerful ideological move, the young Octavian restored this temple and placed it at the centre of his religious and political policy.

The temple’s associations with victory and the correct procedure for the declaration of war made it an appealing candidate for attention, but the nature and the outcome of the rebuilding appears to have been quite unusual.

In this talk Dr Withycombe will examine a number of Roman coin issues and literary sources to explore this unique temple restoration and offer a case study of early Augustan temple rebuilding in Rome.

Lily Withycombe graduated with a PhD from Royal Holloway, University of London, in 2014, having written a thesis on religious architecture and topography of Augustan and early Imperial Rome.

She has since been working as a curator at the National Museum of Australia, and is particularly interested in the architectural and topographical reconstruction of ancient cities, as well as multimedia and digital displays in Museums.

Supper in the Museum will follow, where items of merchandise will be on sale, all proceeds of which help us support the ANU Classics Museum.

CityNews - February 21, 2020
0
The arrival of a fridge has inspired the National Museum of Australia to call on the public to share any stories that honour front line emergency workers following a period of unprecedented fires.