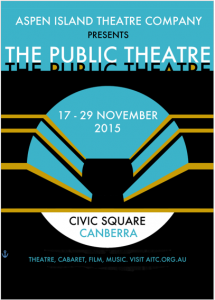 “The Public Theatre” will see a two-week program of performance, music, spoken word and film coming to The Multicultural Fringe’s former stamping ground, Civic Square, in the second half of November.

The project is the brainchild of Julian Hobba, artistic director of the relatively-new Aspen Island Theatre Company, who said the space was being reconceived by project partner Cox Architecture, inspired by the “timeless design” of the Classical Greek theatre but realised in a pop-up aesthetic.

“Civic Square is the political and cultural heart of Canberra. Like the ancient Greek theatre next to the Parthenon, we want to enliven the space with performance and ideas,” Hobba said.

The two week program, he said, would feature “great local performers and examples of the country’s finest established and emerging theatre talent.”

Highlights include screenings of films such as “Don’s Party” that were based on famous plays, “Bomb Collar”, a one-man sci-fi cabaret by  Nick Delatovic, “Sappho in 9 fragments” performed by Mary Helen Sassman, a conversation about our city hosted by Cox Architecture and, for a very theatrical finish, “Four Day Oedipus”, a moved reading prepared over four days of  Sophocles’ “Oedipus Tyrannos”, to be co-directed by Hobba and Katie Cawthorne.

CityNews - March 31, 2020
0
IN welcoming "in principle" the federal government's wages subsidy, Unions ACT says it isn't enough and that tens of thousands of workers in the territory will be left behind due to exclusions and the low subsidy amount.