THE Embassy of Spain will be using the Multicultural Festival on February 14 to present its new “OzSpain” logo and image for Spanish Culture in Australia.

Their idea is to convey a modern image of Spain by using an element of the traditional— bulls. One example will be postcards of an imaginary map of OzSpain and of an imagined animals, the ‘kangabull’, reminiscent of the Australia Indonesia Association’s ‘kangaruda’. There will also be bookmarks telling about the recent discovery of a plan by the Spanish to invade Australia in the 18th century, magnets, mugs and t-shirts. The booth of the Embassy of Spain, No.24, will be located at the EU Village in front of the Canberra Theatre.

THE Griffyn Ensemble have been busy this week with Ms Hongyan Zhang – one of the world’s foremost pipa players – as they prepare for their “Whitlam In China” concert this Thursday, Feb 12 only, at 7pm in the National Library of Australia. Also, as a special treat they have a pre-concert performance in the Library foyer from 6:15pm, featuring musicians from the China Philharmonic Orchestra. Bookings to griffyn.iwannaticket.com.au or 0466 480 104.

CANBERRA Symphony Orchestra’s Shell Prom Concert: “A Touch of Tartan” will take place this Saturday, Valentine’s Day as thousands of Canberrans take their picnic baskets onto the lawns of Government House for the 33rd Shell Prom Concert. Held in conjunction with the National Multicultural Festival, the program includes favourites such as ‘Scottish Fantasy’ and the ‘Hebrides Overture’. Conducted and compered by ABC Classic FM’s Guy Noble, it features young Australian violin player, Anna da Silva Chen, performing for the second time at the Prom. The concert starts at 5pm, gates open at 3.45pm. Tickets at the gate or by visiting cso.org.au.

BILK Gallery is opening the year with ‘Unfold and Construct,’ an exhibition of new works by Canberra artist, Phoebe Porter, which for this series combines geometric abstraction, bold colour and unexpected asymmetry to create jewellery that resonates with influences of the Bauhaus and Russian Constructivism. Included in the exhibition is a video work developed in collaboration with artist Sal Cooper. Opens this Friday February 13 at 6pm in Bilk Gallery, 12 Palmerston Lane, and Manuka. Hours Wed-Thurs. 11-5 Fri 11-7 Sat 11-4.

TODAY, February 12, at 6pm, M16 Artspace will open three new exhibitions centred around different aspects of contemporary Australian art. Thay are:  “Contemporary Visions of Aboriginal Art: Warlpiri Artists from the remote communities of Yuenduma and Lajamanu, Northern Territory”, (curated by Catherine Jaktman); “The Other Side”, an immersive installation work, by artist Her Riot; and “Alchemists’ Paradise”, paintings by  by Tommy Balogh. All shows run until March 1, noon to 5pm, Wed-Sun at 21 Blaxland Crescent Griffith.

EAST meets West when Egyptian-Australian oud virtuoso Joseph Tawadros joins Richard Tognetti and the Australian Chamber Orchestra in a unique exploration of musical connections, interweaving tracks from ‘Permission to Evaporate’ with Baroque masterpieces including Vivaldi’s ‘The Four Seasons’. Tognetti says, “It’s been a dream of mine to marry the music of Egyptian classical musician Joseph Tawadros with Venetian Baroque music.” 7pm Canberra – Llewellyn Hall Saturday 14 February ? Bookings to aco.com.au or tickets at the door.

LOVE is in the air this Valentine’s Day at Ben & Jerry’s Openair Cinemas on the Patrick White Lawns outside the National Library with the classic rags-to-riches love story ‘Pretty Woman’, along with food and music from Beat Taskforce. Even the cocktails are Valentine’s Day-themed. Saturday 14th February, gates open 6pm, Movie starts at 8.15pm, bookings to openaircinemas.com.au

IN term 4, 2014, Belconnen Community Services ran their first beginners ukulele group. Its popularity and success led to the introduction of a continuing group and a new beginners’ group for 2015. The Beginners’ Group runs Tuesdays, 4pm – 5:15pm from February 10 to April 7 and is suitable for beginners over the age of 8. The Continuing Group on Tuesdays from 5:30pm – 6:45pm runs from February 10 – April 7 and is for people who can play a few chords (C, F, G, Am, D) and move easily between them. To download an enrolment form visit bcsact.com.au. 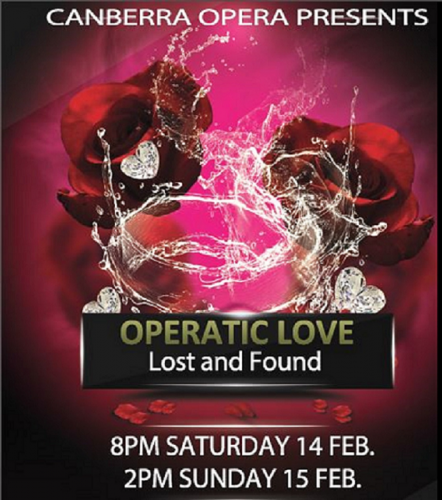 CANBERRA Opera has surfaced to announce that its first performance for 2015 will be held on the evening of Valentine’s Day (with a matinee the following day). “Operatic Love – Lost and Found” will feature some of Canberra Opera’s principal singers and new soloists singing heartbreaking and uplifting solos and duets. At Griffith Hall, 55 Stuart Street, Griffith, 8pm Saturday February 14 and 2pm, Sunday, February 15, bookings to canberraopera.org.au

PHOTOGRAPHY that blurs the boundaries between the body and nature will be on display throughout February at the Front Gallery and Café in Lyneham. ‘Synergenesis’ is a new collection of black and white images created by local photographic artist Nathan J Lester, who explores the harmony in form between flowers and the naked human body, and represents the birth of new way of seeing both elements. All of the artworks were created between October 2014 and January 2015. Opens at 6pm today, Thursday, February 12 at the Front Gallery and Café, Wattle St Lyneham.

CORROBOREE Park Hall in Paterson Street, Ainslie is the location for a summer evening of acoustic music, cold beer and sausage sandwiches this Sunday, February 15 from 4-7pm. Hashemoto, The New Gods of Thunder, The Cashews and Matty Ellis will perform and all proceeds from the evening will go towards assisting with costs of spinal surgery for their drummer friend Dan, who’s been battling with Scheuermann’s disease. Tickets at the door.

WAGGA’S Riverina Chamber Orchestra Collective is inviting lovers of classical music to treat themselves to a concert of romantic music this Saturday, Valentine’s Day at 5pm in Tuggeranong Arts Centre. The program includes many favourites such as Borodin’s glorious ‘Nocturne’ as well as a selection of love inspired songs from the Tin Pan Alley era. The Collective, led by well-known violinist Lauren Davis, is made up of professional musicians from Canberra and Wagga, including: Damien Jones – viola, Tamaris Pfeiffer – viola, Clare Brassil – cello and vocalist Meredith Adams. Tickets include interval refreshments, bookings to tuggeranongarts.com

CANBERRA photographer and performance artist John Reid and ‘Imaginarium’ curator Amanda Stuart are leading a ‘solar walk’ on the shores of Lake Ginninderra outside Belconnen Arts Centre this Sunday February 15 from 3pm. Reid’s solar walks have taken place in a variety of inspirational settings across Australia, and he says participating in the “Solar System Walk” is an opportunity to imagine the earth from a new perspective. Participants will be asked to assume a walking position at odds with gravity, giving the impression of striding into space. FREE but registration essential by Friday, February 13 to John.Reid@anu.edu.au

THE Azerbaijani Cultural Association of Australia together with the Land of Fire Performing Arts Group, is hosting artists from the Azerbaijani State Song & Dance Ensemble for this year’s Azerbaijani Showcase on Saturday, Valentine’s Day at Centre Stage, Civic Square as well as for the Opening Ceremony of this year’s Multicultural Festival. A special feature will be Azerbaijani vocalist Bahram Shokrollahzadeh, accompanied by Tannaz Rafiee on piano.

CityNews - April 7, 2020
0
A woman in her 70s is the newest confirmed coronavirus case in the ACT, bringing Canberra's total to 97.