CHARITY begins on the Great Wall of China, if Communities@Work’s peculiar fundraising offering is to be believed.

“You can take steps to help the most vulnerable and disadvantaged in Canberra… steps along the Great Wall,” the website trills.

Don’t get it? Us neither. But apparently by joining the C@W “team” on the Great Wall of China Adventure you will be “weaving through Beijing’s ancient hutongs on a traditional rickshaw and feasting on succulent Peking duck” all the while enriching “your own life and raise funds to provide food and essential services to those most vulnerable and disadvantaged in our community”. Makes the feasting seem all worthwhile.

THE photo is of “CityNews” arts editor Helen Musa in her role as proud mum at the Archibald Prize opening party in front of finalist portrait of her son, the emerging poet and novelist Omar Musa.

The Sydney prize was won by Nigel Milsom’s “Judo House Part 6 (The White Bird)”, a portrait of the showman barrister, Charles Waterstreet, the inspiration for the ABC television series “Rake”.

But a lot of the love on the night went to American-Australian artist Kerry McInnis for her 17th shot at the Archibald titled “Omar Musa: the poetry of unease”.  McInnis has a studio out on the Captain’s Flat Road.

Her painting was hung in what they call the “winners’ room”, immediately facing the actual winner and, says Helen, it got a lot of attention.

Joanna Mendelssohn writing in “The Conversation” said: “For me, the most impressive painting that was hung in the ‘winning room’ this year is still Kerry McInnis’ ‘Omar Musa, the poetry of unease’ – a muted study of one of this coming generation’s most interesting writers.”

WHAT to do with an old, clapped-out airport terminal? Not a problem for the environmentally smart Canberra Airport owners – they recycled it! Well, not all of it, but 85 per cent of the former Canberra terminal lives on. The concrete, steel and other waste materials were sorted and utilised on other projects.

In the July edition of the airport’s house magazine “The Hub”, it says they also recycle 100 per cent of their green waste (for compost and mulch), have solar hot-water systems on top of the multi-level car parks and their underground tanks hold 1.3 million litres of collected water, enough to operate the terminal for an entire summer without rain.

IS it the miracle of Christmas (in July)? The hapless, doomed trees on Northbourne Avenue that were recently branded with signs notifying their impending demise as the result of disease are suddenly free of the death warrants. Does this mean they have returned to good health (praise be)? In any event, all of Northbourne’s median-strip trees are due to make way for Capital Metro’s urban meadow sooner or later.

IN analysing its five million orders of the past year, online takeaway ordering website EatNow.com.au has discovered that Gen Y’s tastebuds vary greatly between cities, with no two cuisines proving a favourite from any two states. 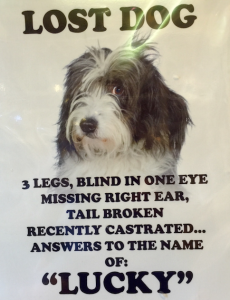 A SIGN in a novelty shop sent to CC by a Tuggeranong snout manfully battling the UK summer’s heatwave.

Wendy Johnson - April 1, 2020
0
Dining reviewer WENDY JOHNSON turns to takeaway and wonders how social Canberra will cope now that COVID-19 has robbed us of our beloved hospitality industry.