“Canada’s Arctic: Vibrant and Thriving” is drawn from “Canadian Geographic Magazine” and gives a glimpse into the lives and environment of these distant northerners. It’s at the High Court, until July 2.

Loincloths at the ready

Well maybe not that, but the Paleo Café Canberra is opening in Mort Street on June 25.

What’s paleo food, CC wondered? And Wikipedia told us: “The paleolithic diet, also known as the paleo diet or caveman diet, is a diet based on the food humans’ ancient ancestors might likely have eaten, such as meat, nuts and berries, and excludes food to which they likely wouldn’t have had access, like dairy.”

Owner Jayne McLaren says she discovered the paleo lifestyle after 10 years of health issues. After being diagnosed with pre-diabetes, increasing her exercise and later turning to a vegetarian and a high raw diet, her thoughts were constantly on food.

She was later diagnosed with two auto-immune conditions and eventually discovered paleo. After experiencing the benefits, she wants to encourage those around her to make some changes as well and opening Paleo Café was a natural progression.

PALLIATIVE Care Australia has launched its “Guide to a Social Media Afterlife”, which explains how to manage online and social accounts so your data is preserved, memorialised or deactivated when you trip off this mortal coil.

Describing something like digital graverobbing, PCA CEO Liz Callaghan says: “There are stories of people’s pages having their personal data stolen after they have passed away or people breaking into accounts.

“Some websites will send mail to friends and family after you have died, others will continue to post to your Facebook accounts. There are a range of weird and wonderful elements you can bring to a social media account. But making sure you are protected is the most important.”

Hands across the world 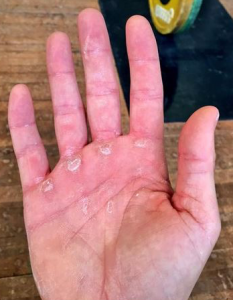 WHO would have thought riding a push bike would give you unhappy hands? Canberra’s BMX gift to the world, the very successful and seriously athletic Caroline Buchanan has tweeted this photo of a blistered hand at the gym with a droll three words that say: “Hard work hands”.

IN a largely agreeable ACT government response to the recommendations of the Disability and Community Services Commission’s report “Developing an ACT crisis response to women with disabilities who experience domestic violence and/or sexual assault” the bureaucrats were not to be hurried.

In Recommendation 1, that the government, in accordance with s87 of the Human Rights Commission Act 2005, respond to the recommendations within three months of its being tabled in the Legislative Assembly, responds with “Noted. The Government notes the timeframe recommended by the Commission”. The report was delivered to the Attorney-General on June 27, 2014, the response took until May 21.

Sponsored Content - June 4, 2020
0
Sponsored content from a valued advertiser. WITH Dr Carmelo Bonanno, the original owner of Dentistry at Karabar, back in the clinic, there have been changes...