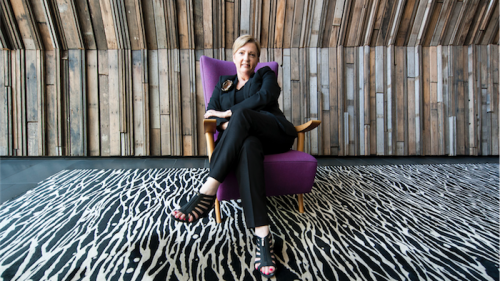 JENIFER Dwyer Slee, pictured, is the first amongst us to be gonged with a Lifetime Award from the Professional Conference Organisers Association. And she’s not even a conference organiser! She’s the director of sales and marketing at the National Convention Centre.

“Jenifer truly cares about bringing business to Australia and to Canberra and has been open and generous in sharing her knowledge in how the hotel sector operates with PCOs, to help with their professional development and upskilling,” says Barry Neame, president of the PCO Association. “This includes helping young people entering the industry acquire quality skills and quickly. Jenifer has always been open to being a mentor.”

DESCRIBING the Federal Golf Club’s seventh attempt to build 150 houses and apartments as “Groundhog Day”, president of the Red Hill Regenerators Ross Kingsland says the conservation group is “bitterly disappointed” that the cash-strapped club has dusted off failed development applications to yet again seek “inappropriate development on their lease”.

However, he says, this time it’s bigger than before and would require tens of hectares of clearance within the adjoining Red Hill Nature Reserve for fire management, roadworks and other infrastructure.

“It would also require bulldozing at least 300 native trees and nationally important endangered woodland,” he says.

FORMER London coffee-lounge folk singer and latter-day Canberra accountant Gail Freeman is often to be found in the merch queue after concerts to share a fraternal word with a visiting star or two.

CC is therefore unsurprised to see her flashing this snap around Facebook of her chumming up with singer Sir/Saint Bob Geldof, who was at the Press Club on his best behaviour the other night.

The one-hit-wonder (“I Don’t Like Mondays”) and global human rights campaigner was improbably in town to give the keynote speech for the Leadership in Government Awards. According to one snout, despite some gentle pressure not to swear, the Irish knight dropped a few eff bombs through his well received discourse and shared some frank views of leadership. Apparently, he doesn’t think much of it. Despite that, he brought the house down.

WITH a looming pokie grab by the casino, it isn’t the time for ClubsACT to lose the sharp political nous of its CEO Jeff House, who is heading to the local bureaucracy as deputy director-general Arts, Business, Events, Sport & Tourism, where he will doubless see the casino from a different angle.

DID local Liberals’ media flack Joe Prevedello cross a line by playing nice guy and distributing a media release on behalf of the Speaker?

“Joe, is the Speaker required to clear her communications with your office or is her office unable to send a media release?” we waggishly wondered.

“Usually these Speaker releases get sent out from the Assembly, but the person who usually does it was away,” Joe replied.

“That particular release needed to be sent out on Friday so I did them a favour and put it out for them. I never clear these releases, they are for the Speaker.”

All of which is a sad reflection on Assembly resources that no one in the Speaker’s office was capable of circulating a little news.

AS factionally challenged Environment Minister Simon Corbell joins the other 39,999 junketeers to the Paris climate change conference, one exasperated Canberra ratepayer has written to declare the trip a “rort” and urging “CityNews” to lodge an FOI on the travel/accommodation expenses when he gets back.

“Apart from the cost and self-indulgence, none of us exist in a bubble… the ACT could put in place the best, greenest environmental policies and processes in the world, and they would count for little if the major manufacturing states either side of us kept chugging away in full-bore industrial mode,” our correspondent harrumphs.

“The only consoling thought about Corbell’s trip is that all the famous five-star hotels in Paris will be booked out for genuine VIPs, and Simon could be staying in a dodgy motel in the distant outer suburbs, where life is pretty challenging these days.”