SIX young Canberrans have been selected to represent Australia at the Hip Hop International World Championships – known as the ‘Olympics of Hip Hop’ – in San Diego in August. 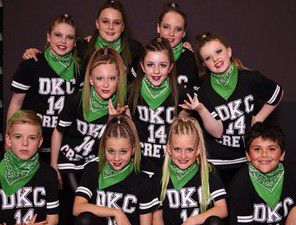 The crew, ranging in age from 8 to 12, won the HHI regional competition qualifier in March.

The dancers have been training for a minimum of 10 hours a week since January and Julie Scheer, director of Dance Central and founder of DKC, is calling on the Canberra community to get behind the crew.

“HHI World Championships presents a unique opportunity for these kids to perform at an elite level, which nothing in everyday life can replicate,” she says.

“Competing on the world stage will teach them life skills beyond dance. Ultimately, they are learning that if you work hard for something, your dreams can come true – no matter your circumstances.”

No one knows this better than 12 year-old, Calwell Primary School student Taylor Hauzer, who used to think hip hop was only for boys. But since trying it at the age of five, she hasn’t looked back.

“I can have a really bad day, and sometimes things are hard at school, but when I dance I forget about all the bad things. It’s my happy place,” she says.

“I watch videos of other crews competing at HHI World Championships from other years, and I used to think that would be awesome to do. Now I’m so excited that we are actually going over there and competing as well.”

Eleven year-old Joshua Cox, the only boy in the crew, agrees: “When I dance, I go into another world. “It’s like talking another language.”

A fundraising concert will be held at Stromlo High School on June 27 and other events will be listed on their Facebook page (facebook.com/helpDKC) and donations can be made through gofundme (gofundme.com/up2t6hc)