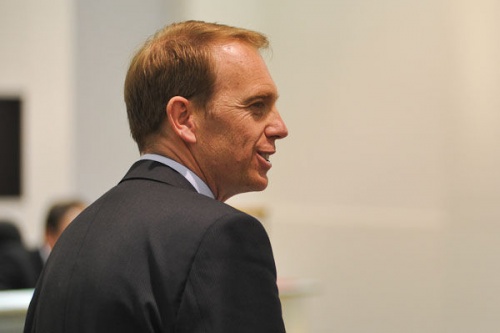 SIMON Corbell says a locally owned and managed company, Capital Estate Developments Pty Ltd, has been selected as the preferred tenderer to develop the first stage of the new Molonglo suburb of Denman Prospect.

“Eight entities representing local, interstate and international corporations responded to the Land Development Agency’s invitation to submit expressions of interest for the project, of which six were chosen to proceed to the request for tender stage,” Simon said.

“The final successful bid of $241.3 million came from Capital Estate Developments, which is wholly owned and operated in Canberra.

“The fact that we had such significant interest from Canberra based companies, as well as companies from around Australia and from overseas, is a sign that the business community has great confidence in the future of our city.

“I’m pleased that local a company was selected as the successful tenderer. As this development will generate a significant boost to Canberra’s local economy with the provision of work for many Canberrans who are engaged in the building sector and the flow-on effects that this brings.

“A significant factor in helping to achieve the very competitive tender price was the outstanding infrastructure that has been created so far in the development of the Molonglo region. I am confident that the tenderers will play a great part in the delivery of one of the most exciting projects in this new area of Canberra.”

The civil works for Stage 1A of Denman Prospect are already well underway. It is anticipated that these works will be completed around April next year with 401 detached housing sites.

The civil works for Stage 1B will be undertaken by Capital Estate Developments and will include approximately 600 detached housing sites plus around 1,000 medium to high density dwellings.

Of the estimated 2,000 dwellings in Stages 1A/B, there will be a minimum of 20 per cent earmarked as affordable housing, which will include 72 public housing dwellings.