DOZENS of trade unionists are rallying outside the Magistrate’s Court today in support of CFMEU ACT organiser John Lomax as he attends court.

A spokesperson for the CFMEU says Lomax faces the unprecedented charge of blackmail in connection with a collective agreement he negotiated on behalf of members in 2013.

“The politically motivated arrest was made by the Federal Police Taskforce connected with the Trade Unions Royal Commission and has raised questions about the motivations of the commission and taskforce.

“It is expected that the DPP will offer no evidence against Lomax,” the spokesperson concluded. 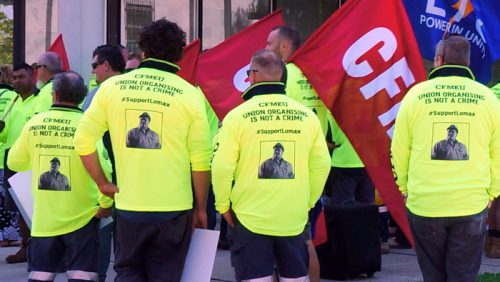 UPDATE: The Union is claiming a resounding victory:

Hundreds of trade unionists rallied in support of CFMEU ACT organiser John Lomax this morning as he attended court to be cleared of blackmail charges this morning.

CFMEU Construction Division National Secretary Dave Noonan said the charges should never have been brought and the case had created grave concerns in the community about the politicisation of the Federal Police.

Lomax spoke briefly to the waiting crowd, commenting: “Me and my family have been through a bit of hell these last ten weeks, I’m just here to fight for workers’ rights, and that’s something I’ll keep doing”

John Lomax’s lawyers wrote to the Director of Prosecutions on the 30th of July, shortly after charges were laid, saying: “there is no reasonable prospect that this prosecution can succeed, in these circumstances the prosecution should withdraw the charge against Mr Lomax. Should you decline this request this offer will be tendered in an application for costs at an appropriate time.”

“Costs have been awarded today, but not before John Lomax’s name has been dragged through the mud for no good reason” said Mr Noonan.

“This is not a dismissal on a technicality, this is a slam dunk” He declared.

Lomax confirmed that he had asked his lawyers for advice on pursuing a wrongful arrest case against the Federal Police.

This comes as the ACT branch of the CFMEU were in the court next door for the first day of hearings as they seek an injunction against the use of information seized in what they claim was an unlawful raid on their Dickson offices.

“This disgraceful prosecution should never have eventuated, the AFP should not be dragged into the middle of the Federal Government’s war against unions and against organised labour” Dave Noonan said.

Kate Meikle - July 28, 2020
0
AN upgrade of the ACT Table Tennis Centre has revitalised the old weatherboard building that accommodates five tables and facilities for its 400 Canberra players.