AUTHOR, entertainer, storyteller and performer David Stavanger, also known around the spoken word traps as Ghostboy, has contacted us to tell of his coming visit to Canberra with musician Richard Grantham. 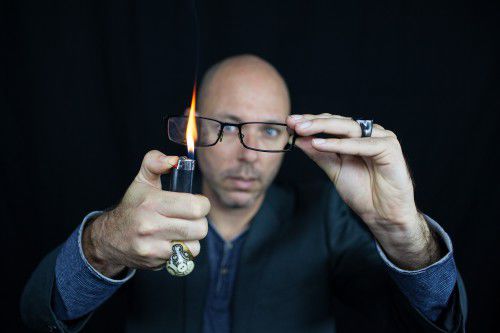 He’ll be doing two feature readings from his newish poetry collection “The Special” released by UQP, along with long tiem collaborator Grantham of The Viola Cloning Project. ‘The Special is really special,” wrote one critic, “what roars back out from the poems is manic tenderness, crazy wisdom and a kind of surreal sincerity, all cranked up to eleven”.

Before he was being a poet and renowned performer, Stavanger spent ten years as a psychologist working in mental health and addictions settings. His poetry and flash fiction have been published in Australian and international magazines, newspapers & anthologies. In 2013 he won the Thomas Shapcott Poetry Prize and took up residency as Australia’s inaugural “Reader-in-Residence”, a 12 month live weekly writing & poetry installation at Brisbane Square Library.

Also co-director of the Queensland Poetry Festival and won the Thomas Shapcott Poetry Award in 2013, his first full-length collection of poetry is in reprint).

In another vein, as Ghostboy, Stavanger is a spoken word artist who has won the Performance Poetry World Cup (Nimbin) who established the thriving QLD poetry slam scene and has performed on stages around the world, both solo and with the band Golden Virtues.

Grantham’s experience stretches from orchestras to bands to solo improvisation in classical, folk, popular, cabaret and experimental styles. His solo improvising act The Viola Cloning Project uses a loop recorder and other effects pedals to turn his customised five-string carbon-fibre viola into a one-man string and percussion orchestra.

Together they’ll be the feature act at the Phoneix’s “Bad!Slam!” this Wednesday April 15. “Bad!Slam!No!Biscuit!” is billed as the poetry slam that gives anyone a microphone on stage in the Phoenix, 23 East Row, Civic for two minutes with no props and no music, although there’s always a feature act and a house band. Sing up for the slam at 7.30pm.

Stavanger will also be doing a poetry/spoken word Masterclass for the ACT Writers Centre this Saturday April 18 from 10am – 2pm.

In “Page + Stage with David Stavanger”, he’ll ask, “What happens when you keep writing a poem beyond the limits of the screen?” This spoken word & poetry writing workshop is designed to help in developing “your own strange poetic voice, and may even open the cage door a little wider”.

Then on Sunday April 19 from 1pm he’ll join Grantham again for “Bloody Lips,” a feature set and book launch at the Monster Bar, HotelHotel NewActon.

As they’re saying, “Sprawl on a couch and be immersed in words and music on a Sunday afternoon”.

David Stavanger and Richard Grantham, at The Phoenix, 23 East Row, Civic, all welcome.

CityNews - May 18, 2021
0
Queanbeyan reader GERRY GILLESPIE, of the Zero Waste International Trust, has a simple solution to toxic-waste fires...