FLAGGED as a cult event, the Philip Glass concert today at the National Gallery of Australia’s Gandel Hall was the penultimate event in the 2015 Canberra International Music Festival. 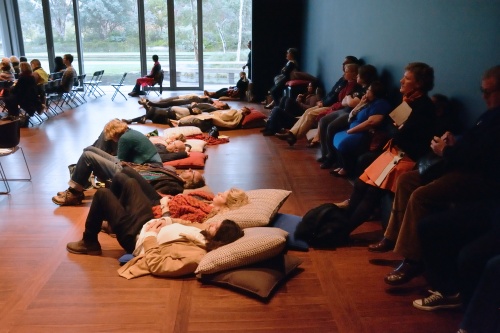 With yet another packed house, this concert offered a setting with a difference at the back of the Hall where brightly coloured cushions were arrayed for those patrons who could remember the 70s, when the iconoclastic American composer was turning the music world upside down and reclining was the best way of appreciating his compositions.

The first half of the concert consisted of disciplined classic minimalist pieces like “Two Pages” and “Music in Fifths” demanded tight concentration from the percussion and keyboard players who took centre stage. In the second half, the more generously orchestrated “Knee Plays” 1 to 5 from “Einstein on the Beach” and the lavish “Music with Changing Parts” allowed more leeway for the performance.

The concert – billed in the program as 120 minutes in duration but in fact almost 3 hours long – proved too formidable for some patrons, who left after the first two hours, although a considerable number of music-lovers stayed until the end.

We have asked composition teacher, composer and Philip Glass aficionado, Jim Cotter, for a more expert commentary on this performance; his review will appear in a subsequent edition of citynews.com.au