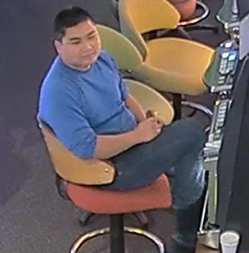 ACT Policing is investigating the theft of an elderly woman’s purse at the Raiders Club in Gungahlin on Monday (25 May).

About 12pm, a man sat down next to an elderly woman playing at the poker machines inside the Raiders Club.

The man engaged in light conversation with her for an hour while she was playing. The woman became uncomfortable by his attention and moved away from him. While doing so, she forgot her purse which was sitting in the coin payout slot.

CCTV showed the offender wait until staff members left the area, before taking the purse and leaving the club.

The offender is described as being a man of Asian appearance, average height and black short hair. He was wearing a long blue jumper, blue jeans and dress shoes. He was possibly driving a silver coloured sedan with black wheel rims and a rear spoiler.

Officer In Charge Gungahlin Station Sergeant Rod Anderson said the theft was a callous act against a vulnerable member of our community.

“It’s really the lowest of lows to target a vulnerable person like this, make them uncomfortable and flustered and then steal from them.”

“His actions were intimidating and deceptive, all for a bit of quick cash. My message to him is this – try to make amends and turn yourself in to the nearest police station soon, because we will find you.”

Police are urging anyone who may have witnessed the incident or have any information that could assist police to contact Crime Stoppers on 1800 333 000, or via act.crimestoppers.com.au. Information can be provided anonymously.

UPDATE: The victim in this matter has contacted police saying that she has recovered her property without any loss.

However police are still interested in speaking with this man regarding this matter. Anyone who is able to identify the man, is urged to contact Crime Stoppers on 1800 333 000, or via act.crimestoppers.com.au. Information can be provided anonymously.