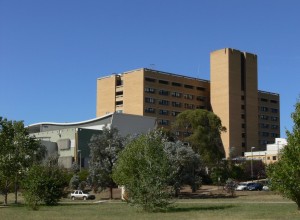 SIMON Corbell says he will spend up to $3.3 million to increase energy efficiency at the ACT Government’s largest energy consumption site, Canberra Hospital.

“The funds were allocated through the Carbon Neutral ACT Government Fund, which is designed to help ACT Government agencies improve their energy efficiency by installing technology that uses energy more wisely,” Simon said.

“Projects make ongoing energy and cost savings, which are used to repay the upfront loan.

“The Canberra Hospital delivers a critical 24 hour service to our community and is the ACT Government’s largest user of energy, with 25% of the government’s electricity use at that site alone.

“Recognising the need to lower the carbon footprint of the ACT public service, the government is providing $3.3 million as a loan to assist the hospital in becoming a more efficient user of electricity.

“Each energy efficiency initiative adopted by government facilities brings us closer to our goal of zero net emissions by 2020 as a government.

“Today’s announcement will see the hospital save a massive $490,000 a year in energy bills by 2017-18 and improve the government’s overall carbon footprint.

“In addition to lighting upgrades and other energy efficiency measures, the hospital will also install a 500kW solar photovoltaic system, reducing the hospital’s energy consumption by about 721,000kWh each year.”

Andrew Mathieson - May 12, 2021
0
A fear that teenagers unable to live with their families could "end up homeless, jailed or as new parents" all within 12 months of leaving out-of-home care has prompted a call for accommodation be lifted and apply to needy 21 year-olds.