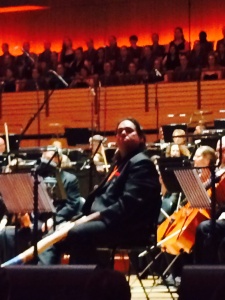 “THE Gallipoli Symphony,” performed by the Queensland Symphony Orchestra and soloists and choirs, at the Queensland Performing Arts Centre Nov 24, Australia Premiere.

A packed-to-the-rafters audience sat rapt last night for the Australian premiere of “The Gallipoli Symphony”, and there was more than one Canberra connection.

Ten years in the making, it tells thin music the story of Gallipoli, created by ten separate composers, all of whom, with the exception of the late Peter Sculthorpe, were present last night to enjoy the rousing ovation.

It is divided into ten parts, each  performed  successively as they were composed under the direction of former “Citynews” Artist of the Year Chris Latham, in ceremonies at Gallipoli and finally coming together as a symphonic work in Istanbul during August this year.

Canberra-trained conductor and former organist, Jessica Cottis, now principal conductor of the Glasgow New Music Expedition, took up the baton as the auditorium filled with the sounds of trickling water and the voice of   Turkey’s Omar Faruk Tekbilek singing a lament, “Gelibolu” with William Barton’s didgeridoo and Horomona  Horo’s Maori instruments  joining the Western instruments to create a seamless  whole.

Garth Farr and Richard Nunns’ movement “He Poroporaoki” depicted the departure of New Zealand troops in October 1914, with touching strains of “Now is the Hour” subtly heard beneath the orchestration.

In Graeme Koehne’s “The Voyage”, the long trip into the unknown was evoked, while  in Sculthorpe’s “Thoughts of Home”, influenced by both The Last Post and a simple mouth organ song, the men are seen remembering what they have left behind. Both these movements were evocatively  illustrated on the screen above.

The drama increased as Elena Kats-Chernin’s “The Landing” suggested the beginning of the campaign and  Kamran Ince’s movement “The Invasion”, featuring a melody played on the Turkish Ney, showed Turkish troops advancing until the devastating battle of May 19, 1915, when they lost thousand of troops in a single day. The musical balance between the Allied and the Turkish perspectives was thus maintained throughout.

It was with New Zealand composer Ross Harris’ movement “God Pity Us Poor Solders” that the Symphony moved into more philosophical territory and the sheer waste on both sides was depicted, recognised with the mutual compassion that characterised this unusual campaign. A hush fell over the auditorium when Horo produced a tiny bone flute, the Koauau, from behind his ear and played a closing lament to this movement.

Conductor Jessica Cottis, masterly yet sensitive, brought the Symphony to a shattering crescendo with Andrew Schultz’s dramatic movement “The August Offensive” conjuring up the most violent part of the fighting.

As the Symphony wound down, we heard Ross Edwards’ quieter movement “The Trenches are Empty Now” and Demir Demirkhan’s “Hope of the Higher Heart”, urging  reconciliation.

In the final movement by Koehne, “Future,” massed voices, instrumentalists and soloists joined in a rousing climax, urging us not to forget, but to come together in peace.”

The audience rose to its feet as one.

Attended by Queensland Governor Paul de Jersey, Queensland Premier Annastacia Palaszczuk and Minister for Veterans’ Affair Stuart Robert, who all praised the venture, the remarkable thing about this Australian premiere was not the reaction of VIPs but that of the ordinary Australians attending a musical performance of rare note.

The big question now is whether “The Gallipoli Symphony” will now become part of the national repertoire.

Ian Meikle - March 8, 2021
0
A week of lying cows, the defence Minister on the defence and a fond memory of ozrock's biggest impresario... all in "Seven Days" with IAN MEIKLE...