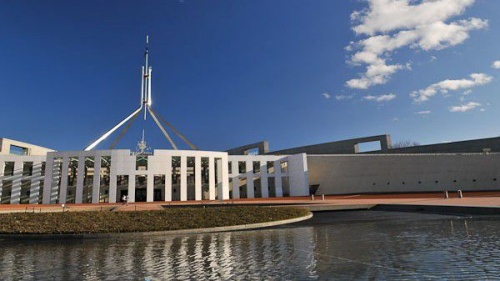 THERE was some concern last week that the burgeoning army of flacks and carpetbaggers who encircle the people’s servants on Capital Hill have grown so numerous that the cavernous Parliament House can no longer safely contain them.

Alternative arrangements are being sought and, having spent eight years of my life in the corridors of power, besides standing ready as the nation’s servant, I have a few helpful suggestions to make.

Anyone pondering how to deal with a shortage of space in Parliament House would do well to hit up Google Maps and have a browse around the precinct.

Aside from the beautiful interior gardens of the building (well worth a visit on an open day if a parliamentary pass eludes you) the surrounds of the building contain numerous sporting facilities.

Aside from the gym and swimming pool inside the building the outer precinct contains a sports oval, six tennis courts, and a basketball court.

Thanks to the main building being built on a hill there’s pretty ample opportunity to build more low-impact office spaces on these largely unused facilities without disturbing the parliamentary sightlines.

But before taking such drastic measures there are two large chunks of the building being put to uses largely unknown in similar democracies.

Having a Ministerial Wing built into the parliament building is a real bastardisation of parliamentary democracy. In my opinion, the executive government should not be sharing space with the legislature.

Ministers already have vast departments across Canberra in which they could set up their offices.

One could argue that the departments would be run much better without absentee ministers. Certainly, it might help with the problem of ministerial offices transforming into mini departments.

And then one’s thoughts turn to the Parliamentary Press Gallery, with offices taking up the top floor of the Senate side of Parliament.

Journalists do traditionally need access to the viewing spaces of Parliament.

A decade ago they also needed access to the Parliamentary TV service, which could be tuned to either house of parliament or any committee room.

These days the internet makes that available to anyone anywhere.

There are also the press-release boxes, where photocopies of media releases are dutifully shoved into pigeonholes, a process which seems almost medieval when a single email list would suffice to service all who wished to sup of the public discourse.

Finally, the press-release box area contains a button with an electric bell. The important (or mischievous) can ring the bell to summon scribes to pay attention to them. Again, an email list could achieve much of the same function of alerting reporters to a media event.

There’s precious little good reason in 2015 for the press to have offices inside Parliament House. Most press galleries make do with a building nearby.

However, there are a number of bad reasons that bear thinking about.

If a political operator wishes to influence a journalist, perhaps with a juicy leak, it’s easier when occupying the same building.

It’s not entirely clear that entertaining and facilitating the dark arts is worth the expense.