Classical guitarists may be the rock stars of the serious music world, but as Guitar Trek’s recent Pozible crowdfunding campaign shows, they’re not in it for the money.

Happily, by slightly exceeding their target of $12,000 and with a half dozen generous donors chipping in to make their total funding around $15,000, the hardworking group embarked during June this year at Sydney’s Studio 301 on recording the group’s sixth album, “Serene Nights,” a title translated from “Noches Serenas” in Spanish, the natural language of classical guitar.

Australia’s (and Canberra’s) premier guitar quartet, Guitar Trek is presently made up of Minh Le Hoang, Bradley Kunda and Matt Withers and guitar guru Tim Kain, who launched the group in 1987. 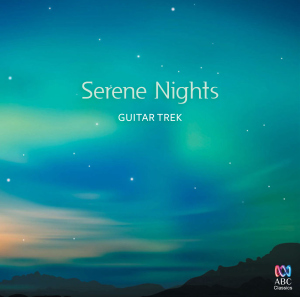 As Kain explained to us at a packed launch on Saturday night in Wesley Music Centre, the idea was to record an accessible album featuring music by composers not necessarily associated with the guitar.

Also on the program were works actually composed for the guitar by Montes and by Australian composer Nigel Westlake.

Guitar Trek has always featured a combination of differently sized guitars – treble, standard, baritone and base, with different kinds of strings. Because of that and the complementary talents of the four musicians, the works showcased from the album on Saturday represented considerable variety, indicating a desire by Guitar Trek to take the instrument into less-charted territory.

It is no accident that the Westlake segment, “Six fish”, was the highlight of the evening, appearing to be a natural match for the virtuosity of the musicians. The quirky “Slingjaw Wrasse” drew a roar of appreciation from the audience.