AS promised the crew of HMAS Canberra, Australia’s largest warship, have paraded down London Circuit this morning to be met by the Chief Minister and assembled dignitaries.

If you’re curious Wikipedia has this to say: 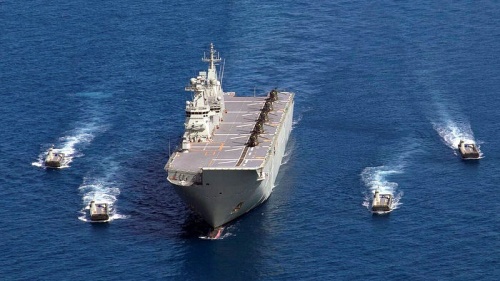 The LHDs will transport 1,046 soldiers and their equipment. Canberra will be capable of deploying a reinforced company of up to 220 soldiers at a time by airlift. Two vehicle decks (one for light vehicles, the other for heavy vehicles and tanks) have areas of 1,880 square metres (20,200 sq ft) and 1,410 square metres (15,200 sq ft) respectively, and between them can accommodate up to 110 vehicles. The well deck will carry up to four LHD Landing Craft (LLC), which can be launched and recovered in conditions up to Sea State 4. The flight deck can operate six MRH-90-size helicopters or four Chinook-size helicopters simultaneously, in conditions up to Sea State 5. A mix of MRH-90 transport helicopters and S-70B Seahawk anti-submarine helicopters will be carried: up to eight can be stored in the hangar deck, and the light vehicle deck can be repurposed to fit another ten. The ski-jump ramp of Juan Carlos I has been retained for the RAN ships, although fixed-wing flight operations are not planned for the ships.

[Photo of HMAS Canberra at sea by LSIS Helen Frank , Photos of crew in Canberra by John Griffiths]

CityNews - February 16, 2020
0
PROF Brian Schmidt has been appointed for another five years as vice-chancellor of the Australian National University.