ZOMBIE fans will be thrilled to learn that “Me and My Mates vs the Zombie Apocalypse” the new Canberra-made zombie comedy, is about to be released. 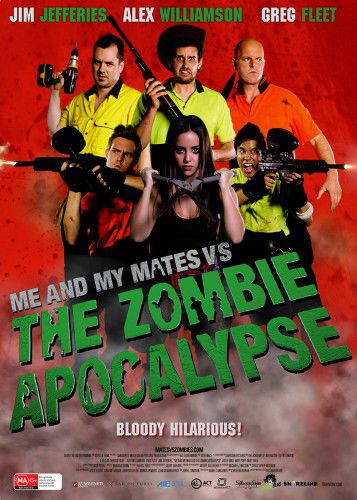 Billed as “the first official Oz-zom-com, an outrageous comedy about friendship, loyalty, beer and zombies,” it’s been directed by Declan Shrubb and produced by Daniel Sanguineti and Christian Doran.

It will premiere in Sydney’s Entertainment Quarter near Fox Studios this Friday July 24 enjoy its Canberra premiere Canberra in a gala event at Dendy this Saturday July 25. This will mark the first stage in the films long journey across the country over the next month before it is released on DVD and VOD in September.

“Me and My Mates began as a submission to ScreenACT’s Low Budget Feature POD in which Shrubb was one of 40 people to receive investment funding. Later the two producers found support from The Academy of Interactive Entertainment, Titan View and Silversun Pictures, then cobbled together a million dollars’ worth of investment, re-investment, crowd funding, federal rebates, loans and in-kind support while choosing to for-go any payment to themselves.

And the plot? Briefly, three Australian tradies get trapped in a telephone exchange during the onset of the zombie apocalypse, and they’re running out of beer.

Darryl (Alex Williamson), a mid-twenties telecom tradesman and larrikin Aussie bloke, gets trapped in a telephone exchange with several of his co-workers. Although the world has gone to ruin, Darryl is still trying to convince his bosses Roy (Greg Fleet) and Joel (Jim Jefferies) to let him join his prestigious indoor cricket team.

Two things stand in his way: the current zombie apocalypse and the fact that Darryl has killed Roy’s now-zombie wife and had sex with his daughter, Emma. Things become increasingly complicated with the arrival of Emma’s boyfriend, Lachlan, and his co-worker Ryan – the apprentices.

As the older tradie blokes clash with the apprentices, Darryl finds himself stuck in the middle of a situation that only has two outcomes: life or death, both to be faced with far too little beer.

“Me and My Mates vs the Zombie Apocalypse”Canberra screening dates are: Dendy Cinema, Civic, July 25 at 9pm, Limelight Cinema Tuggeranong August 12 at 7pm. Bookings to tugg.com.au

CityNews - June 24, 2021
0
While there are no currently reported cases of COVID-19 in Canberra, travel restrictions stay in place and health authorities are warning that there is a “very real risk” of COVID-19 entering the community.