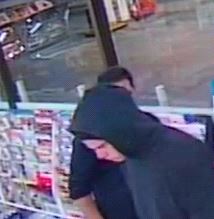 ACT Policing is seeking witnesses to an aggravated robbery that occurred at the Caltex Service Station in Kaleen this morning (Tuesday, May 26).

Around 1.55am, a man carrying a green shopping bag entered the service station, produced a knife and pointed it towards the console operator making demands for cash.

The operator complied with the demands of the man who then left the store with a small sum of cash.

The male offender is described as being Caucasian in appearance, early to mid-20’s, approximately 183cm (6’) tall, slim build and was wearing a black hooded jumper.

No one was injured during the armed robbery.

0
Reviewer DOUGAL MACDONALD says "The Man in the Hat" movie is intelligent, zany cinema without no apparent purpose, until the end credits start rolling and you begin to realise that you’ve been enjoying it without realising why.