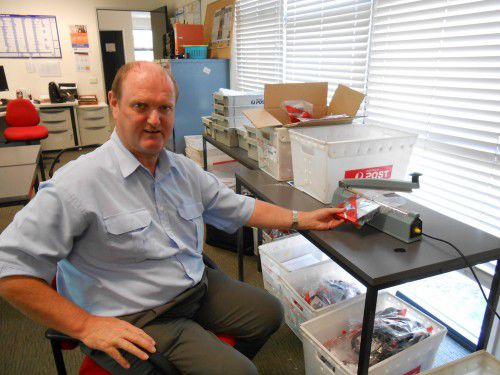 A thirty year career with a single organisation is a significant achievement and Canberran Ken Loft recently celebrated three decades of service with Koomarri.

Koomarri provides people with disability access to employment opportunities in both supported and open employment settings. Mr Loft has been working with the help of Koomarri for thirty years – since he left Koomarri School.

“I have worked at DTZ for 17 years,” Mr Loft said. “I catch the bus to Civic in the morning and then to Woden to come to Koomarri.”

Both DTZ and Koomarri value Ken as an employee, particularly his enthusiasm and commitment to his job.

“Ken rarely has a day off, he is friendly and productive,” Koomarri CEO, Miranda Garnett praised. In fact Ken knows the birth dates of everyone in the Koomarri office and prides himself on getting them the perfect birthday card.

Mr Loft’s long history at Koomarri has seen him outlast a number of CEOs and in 2005 he was travelling past the Koomarri offices, saw they were on fire and reported the blaze. He enjoys the time he spends at both his jobs. His favourite task at Pack ‘n’ Post is to “pack the Qantas headsets for the people going on planes”.

The independence and inclusion associated with employment are both important to Mr Loft. He uses his income to purchase groceries and take part in the weekly meat raffle at his local club. Ken considers his fellow employees and the Koomarri staff his friends and enjoys spending time with them.

Helen Musa - January 19, 2021
0
A light installation created for the National Portrait Gallery acts as a prompt to maintain social distancing, writes arts editor HELEN MUSA in her weekly Arts in the City column.