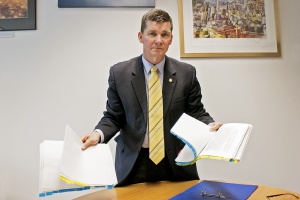 BRENDAN Smyth says the Barr government is continuing to gouge Canberrans as rates continue on their path to tripling.

“General Rates alone have increased to an average of $1820 since Andrew Barr’s tax changes,” Brendan said.

“It’s a tax regime that is neither fair nor equitable.

“The Consolidated 2014-15 Annual Financial Statements released this week show the rates gouge has increased by $36 million. Of the $83 million in additional revenue collected in 2014-15, approximately 43 percent of that is comprised of revenue increases from General Rates, 34 percent from Payroll Tax, and 20 percent from Land Tax. It’s also worthwhile to point out that these three taxes were all part of Andrew Barr’s tax reform agenda,” Mr Smyth said.

“The statements also show a 32 percent deficit blowout at a time when the government is receiving tax revenues at all-time-high levels.

“What you have here is an Andrew Barr tax regime that is designed to appropriate more money from family incomes to pay for Andrew Barr’s big spending government agenda and particularly light rail.

“All the while, taxes like the Barr government’s flawed Lease Variation Charge (LVC) continue to underperform and stifle economic development in our city and town centres, something the Canberra Liberals will correct in government.

“The fact is that Andrew Barr’s rates increases are not sustainable for Canberra families. It’s unfair he continues to gouge to pay for light rail,” Mr Smyth concluded.

Helen Musa - October 20, 2020
0
OUTRAGE, depravity, Menzies, Hawke, the Aboriginal Tent Embassy, the Telstra Tower shown as a phallus – they’ve all appeared on the covers of “Woroni”, the ANU’s student rag.

Pressure on when the population pie starts to shrink