WELL-known local artist, Meg Morton, has curated an exhibition of figure drawings and sculptures, “7 1/2 heads tall”, to open at the Nishi Gallery in Kendal Lane, NewActon tomorrow night, Friday, January 23, from 6 to 9pm, with music, food, drink, and a large and art by 10 Canberra artists.

THE show, which features works by artists in the Colony Collective and the Nishi Arch Collective with Morton’s own life drawing groups, runs until Sunday, February 1, Monday to Friday 11 to 3 Saturday to Sunday 11 to 4 and Australia Day public holiday, 11 before. We are told the title “7½ heads tall” is a reference to the commonly used measurement for the proportion of the human figure. 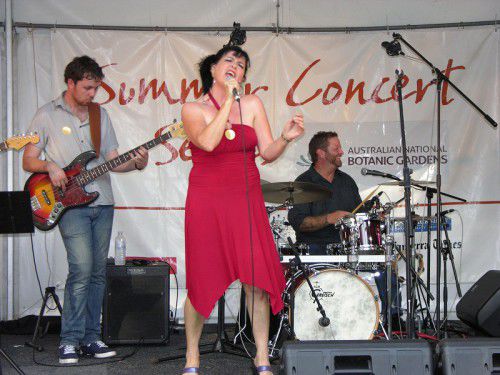 “SUMMER  Sounds with The Central” is coming to a close with its grand finale this weekend. Annie & the Armadillos will entertain the crowd with their popular jazz and blues on Saturday and there’s a special extended Australia Day concert with Frankly B Paverty on Sunday.  Saturday – 5.30 pm – 7.30 pm Sunday – 5.30 pm – 8.30 pm, Australian National Botanic Gardens Eucalypt Lawn Clunies Ross Street, Acton.

ANU School of Art and M16 supporter, Gordon Bull, (just back from a residency in Paris) will be on hand tonight at 6pm to open M16 Artspace’s first shows for the year. All welcome. The four exhibitions juxtapose experiences of the modern and natural worlds. The shows are “A Pinch of Salt” by Kerry Shepherdson”, “Bubble ’n’ Squeak:” by Dash Kossmann, Fran Meatheringham, Michele England, “Square Eyes” by Josh Owen, Julian Rouch and Kai Wasikowsi and “Beauty Through Motion” by Kelly Hayes. The shows runs to February 8 at 21 Blaxland Crescent Griffith.

“DEFT, neatly-paced direction moves the storytelling along at a fast clip… perfect holiday entertainment for audiences both young and old”— that’s how our musicals critic Bill Stephens described Ickle Pickle’s production of the Rodgers and Hammerstein musical, “Cinderella”, closing this Saturday Jan 24, but with seats still available at Belconnen Theatre Swanson Court, Belconnen, bookings to canberraticketing.com.au or 6275 2700.

MIKE Rosenberg, better known as Passenger, will be bringing his ‘Whispers’ tour to the Canberra Theatre at 8pm tonight, Thursday, January 22. 2012 and 2013 have been watermark years for this acoustic folk troubadour, with sold out tours in the UK, Europe, Australia and the US and over 6.5 million single sales. His new single, “Heart’s On Fire”, is playing on radio stations across the country and is the first single from his new album. He’ll be supported tonight by The Once. Bookings to Canberratheatrecentre.com.au or 6275 2700.