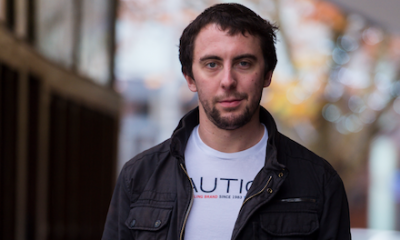 FORMER paratrooper Michael Kreminski has put his money where he wants his mouth to be.

Michael is a psychology student at ANU and has donated half a $5000 travel voucher he won in the Unilodge Wanderlust Competition to the charity Soldier On.

His donation has helped Soldier On send wounded veterans to Italy to participate in this month’s Trois Etapes Giro 2015. The three-day, pro/am cycle challenge has raised $50,301 so far.

Before his studies, the 28-year-old originally from Adelaide, spent more than five years as part of the Australian Army’s airborne forces and completed tours in East Timor and Afghanistan.

“I was studying chemical engineering at the time and I wasn’t happy. I didn’t want to study something I didn’t enjoy so I walked down to the recruitment centre and signed my name on the dotted line,” he says.

“I was qualified as a private after my training at Kapooka and volunteered to be a paratrooper, it was quite a rush.”

Through his experience with the forces, Michael became aware that it is not necessarily the physical scars that cause the greatest pain.

Michael says: “We knew we were going to Afghanistan for a few months before, so we were prepared, but it was a very different place to Australia. The way of life was the biggest shock, going from a university environment to picking up a rifle and going into combat.

“Returning home, many suffer from depression, anxiety and post traumatic stress disorder. The main thing I realised after speaking to veterans was that they were carrying this huge emotional burden and mental scars, it can happen at any age.”

Founded in 2012, Soldier On supports Australian service men and women who have been wounded, physically or psychologically in contemporary conflicts by helping with rehabilitation, organising community events, as well as helping with employment and education.

Michael says: “Soldier On does excellent work, when soldiers come out of the army, most don’t have any sets of skills. The charity helps them to establish a career so they can provide for their families, they also brief soldiers beforehand and provide counselling.

“When you get discharged and return to your life it can be very isolating, you do feel very lonely.”

Now in his final year, Michael is planning to use his psychology degree to help service men and women affected by mental illness.

“Personally, being in the airborne infantry was a positive experience for me and it has helped me grow as a human being,” he says.

“I am hoping to do my honours next year with the intent to rejoin the Australian Army as a psychologist under the AHPRA scheme (Australian Health Practitioner Regulation Agency).

“Because I have had the experience of being a private in a high tempo army environment, I know the stress in both wartime and peacetime, the separation from families and going on continuous exercises, I will be able to relate to the soldiers in my care.

“More soldiers die from their own hand than from enemy fire and it is going to get a lot worse if we don’t do something about it. People aren’t aware of it, that is why it is so important to talk about it.”