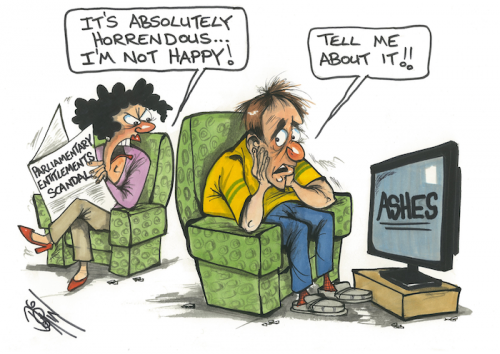 THE vexed issue of politicians’ travel on the public purse reached into our own Legislative Assembly this week with Speaker Vicki Dunne’s decision to take her husband on an April trip to Malaysia in defiance of last year’s ban on spouses.

This is the same Vicki Dunne who, with Liberal colleague Giulia Jones, embarked on that notorious 2014 world survey of prostitutes that produced exactly nothing. And she took her husband on that one, too.

Now the Assembly’s “ethics and integrity adviser” Stephen Skehill has decided she and two other pollies should accept a propaganda junket to Taiwan; but the bigger issue of all freebies from corporations and governments shouldn’t be too difficult, Stephen; a simple “no” would suffice.

NOR should Federal Opposition frontbencher Tony Burke have to think twice about repaying the $12,000 for his kids to join him for a holiday at Uluru. No one was more “outraged” at Bronwyn Bishop’s excesses than the holier-than-thou Labor MP. What’s good for the goose, Mr Burke…

PM Tony Abbott took lots of flak this week for his decision to reject the move by Aboriginal leaders to secure their own agreed position on a constitutional amendment before taking it to the wider Australian community.

“It might produce something akin to a log of claims,” he said. And that could result in a “them-and-us” division in the lead up to a referendum.

While your columnist is not known as a special fan of the PM, it’s very hard to fault him on this one. Such a division would be a disaster. Truth is, it’s the whole community that must take the issue forward, but this can only happen if we follow Canada’s lead with its current Truth and Reconciliation Commission. That will reveal the true horrors of the British occupation of Aboriginal lands and the devastation of an entire people… the stories we are never told in our school curricula.

HOWEVER, the PM’s announcement that SA would get contracts to build billions of dollars worth of naval surface ships produced a horse laugh from defence observers. It confirmed the widely held view that Tony has given the nod to the Japanese as front runners to build the next generation of Australian submarines. The announcement was a pre-emptive prime ministerial strike to save Coalition seats in the election he’s desperate to call before the next Budget.

THOUGHTFUL call from ACT Lib Leader Jeremy Hanson for a special magistrate dedicated to a Family Violence Court. According to Jeremy, “it would ensure consistency of decision-making and accumulation of expertise”. Indeed, that specialised knowledge might well lead to new and innovative ways to deal with the social plague that disgraces our community.

ANGER is gathering on the southside as the new suburbs of Coombs, Wright and Stromlo make it almost impossible to find a parking spot at the Weston, Curtin and Mawson shopping centres. Full marks to the Government for the new road works, but multi-tasking seems beyond them.

SO, too, among our poor, wretched cricketers whose performance at Trent Bridge beggared belief. Perhaps they should stay there till they’ve mastered English conditions. Happy to have them back in, say, 2020… 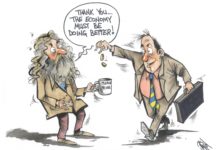