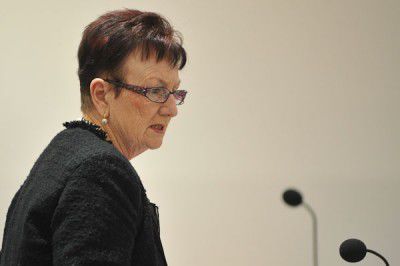 LONG-SERVING Member for Ginninderra Mary Porter has announced she will not be re-contesting the Legislative Assembly elections due in October 2016.

“I have been considering my future of late, and as the Labor Party nominations to contest the next elections came to a close, I needed to make this very difficult decision,” Mary said.

“By the next election I will have turned 74, and I have always said that one’s role as an MLA is to give 100 per cent of your effort. Many would realise that I have been experiencing a number of health challenges of late, and while not being of a very serious nature, they continue to prevent me giving that 100 per cent. Whilst I am still committed to my constituents, to my party and to my colleagues, I believe that it is the right time for me to move on.

“I believe with the changes that will take place at the next election, which will see an increased number of members and changes to the electorates, it is a good opportunity for new members to be elected to the Assembly, and I am aware there are number of excellent candidates who have nominated for the Labor Party pre-selection process.

“It is a great honour to be chosen by your fellow Canberrans to represent them and I have been honoured to serve them since 2004. I must say I have greatly enjoyed the time I have been privileged to spend as an MLA. As a Member for Ginninderra I have particularly welcomed the opportunity of helping to make a difference for people who believed they were not being heard or not knowing where to turn if they had a problem.

“Introducing a private members bill and having it passed unanimously to give greater security for people living in retirement villages was certainly a highlight for me, as was the continued growth in the use of Restorative Justice processes in the ACT community – a passion I will continue to pursue.

“Advancing the conversation around end-of-life issues is also important, particularly to older members of our society, and I look forward to continuing that conversation for the remainder of my term and after my time in this place. I am also very committed to animal welfare and responsible pet ownership, and have been privileged to work with the members of Pets and Positive Ageing Incorporated and the ACT Government to make a real difference here, again something I will continue to work to advance.

“There are many things that I am proud to have been able to achieve with the community in my role as an MLA and, while I know there will be many who are disappointed with my decision not to continue in the Assembly, I am confident there are a number of outstanding community based candidates who will continue to represent Belconnen residents in the newly drawn boundaries of the electorate of Ginninderra.”

UPDATE: The Belconnen Liberals have paid their tribute:

Speaker of the Legislative Assembly Vicki Dunne and Deputy Leader of the Opposition Alistair Coe have thanked Mary Porter MLA for her service to Canberra as she announces her retirement.

“I would like thank Ms Porter for her work over the years and particularly in her role as Deputy Speaker of the Assembly. Mary has been terrific to work with and I thank her for the work she’s done,” Mrs Dunne said.

“Politics promotes adversity but Mary has been a person to bridge that divide. I wish her well into the future,” Mrs Dunne concluded.

“Mary’s retirement will be a loss for the Assembly. I very much respect the way Mary operates and I’ve enjoyed spending time with her over the years in the Assembly, oncommittees, at events and on the hustings,” Mr Coe said.

“Mary has a compassionate and professional approach to representing the community and I thank her for her service to Canberra,” Mr Coe concluded.