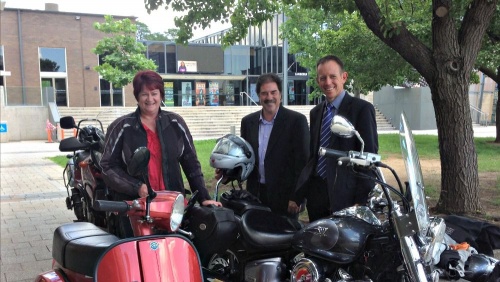 SHANE Rattenbury says a two-year trial of motorcycle lane filtering will commence in the ACT from Sunday February 1.

“Motorcycle lane filtering is when a motorcyclist moves between stationary or slow moving vehicles in the same lane. This allows motorcyclists to move quickly and safely away from congested areas of traffic,” Mr Rattenbury said.

“The Government is committed to improving safety for the Territory’s growing number of motorcyclists and other vulnerable road users and is getting on with the job of implementing the agreed recommendations arising from last year’s Assembly inquiry. The trial of motorcycle lane filtering is the first cab off the rank and will commence from 1 February 2015.

“The trial will cover the whole of the ACT and will be subject to a number of conditions, including a requirement that motorcyclists not filter at a speed greater than 30km/h, in school zones or on the kerbside next to a footpath, or in a bicycle lane or breakdown lanes.

“An education campaign, including television and radio commercials has been developed to make road users aware of these conditions and the commencement date of the trial. It also includes messaging aimed at encouraging positive attitudes towards motorcyclists and raising awareness of the safety benefits of lane filtering.

Mr Rattenbury said the broadcast of the television and radio commercials will commence from 23 January and continue into the start of February, including advertising during the Cricket World Cup.

“I encourage all road users to make themselves aware of the conditions of lane filtering, and look out for motorcyclists that may be undertaking the practice around them when the trial commences next month,” said Mr Rattenbury.

Trees and talk, it doesn’t get much better for Scott