CANBERRA contemporary youth dance ensemble Quantum Leap, QL2, is about to stage a reinterpretation of a production first performed in 2005 and remounted for the Adelaide Arts Festival in 2007. 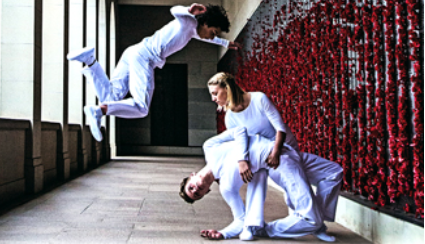 The original choreographers of “Reckless Valour,” Fiona Malone, Rowan Marchingo, Natalie Cursio and Jodie Farrugia have returned to town to redevelop the work, originally created in association with the Australian War Memorial. Other creatives are composers Nicholas Ng, Warwick Lynch, Mark Webber and Luke Tierney, all working under the artistic direction of Ruth Osborne with dramaturg Paschal Daantos Berry.

In a new development, dancer and choreographer, James Batchelor, one of the original cast in both 2005 and 2007, is returning to choreograph a new section focusing on the displacement of people caused by war.

This year’s Quantum Leap ensemble will be joined by visiting dancers from Thailand, the Philippines and Perth, as 32 young men and women aged from 14 to 22, the age of many young soldiers enlisted in World War I, revisit the original work with new perspectives.

Cursio says that despite the challenges of reinterpreting work from 10 years ago – rare in contemporary dance – she has found that her motivations have remained consistent: “It doesn’t feel as if Australia has progressed that much at all. We are still sending troops abroad; it just feels like a continuation of the same wars from before. It never stops, does it?”