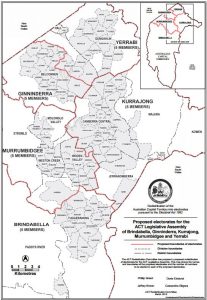 THE final make-up of the ACT Legislative Assembly electoral boundaries for the 2016 election has been announced today by the ACT Electoral Commissioner Phillip Green.

“The Augmented ACT Electoral Commission has decided to accept the electoral boundaries proposed by the ACT Redistribution Committee,” Phillip said.

“The Augmented Commission decided that it would not uphold any of the objections to the proposed redistribution of the ACT’s electoral boundaries, as set out in its statement of reasons published today.

The final electorates are:

The Redistribution Committee published a proposed redistribution of the ACT into 5 electorates on 31 March 2015 and invited objections to the proposal by 28 April 2015.

Nine objections to the proposal were received by the Augmented Commission. One objection was subsequently withdrawn and two late submissions were also received.