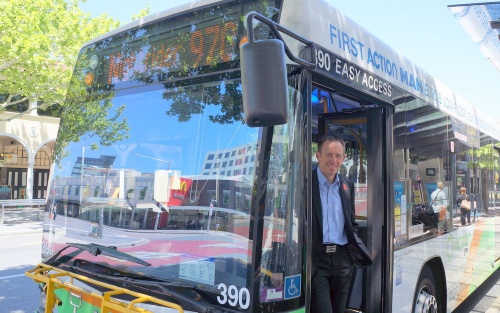 “Since Network 14 was introduced last year ACTION has been analysing data from the MyWay and NXTBUS systems and will continue to make ongoing changes to the scheduling of services to create more efficient and effective timetables to suit the needs of the Canberra community.

“These changes will include improvements based on both network analysis and passenger feedback that we have received since the introduction of Network 14. At a practical level, this will mean a better distribution of services and better connections between routes, and improved spacing of departure times for similar routes.

“The vast majority of feedback we received about the current network has focused on the reliability and on-time performance of services, and these are the key issues we are targeting with the new timetables.

“ACTION’s current bus network was introduced on Monday 1 September 2014 and was the first to be developed based on patronage data from the MyWay system along with feedback received from the community, passengers, drivers and schools representatives via a community consultation process.

Consistently reviewing and refining timetables is a key tool for building a better bus service for Canberra.

“By frequently reviewing the timetables we can ensure schedules are accurate for current on-ground conditions such as roadworks. For example, the new timetable adjustments include extra time for services that travel through Constitution Avenue area.”

There are no changes to weekend services.

Full details including routes, timetables and maps are available at action.act.gov.au or from the ACTION & MyWay Information Line on 13 17 10.

CityNews - April 3, 2020
0
Chief Minister Andrew Barr has slammed the real estate industry this afternoon (April 3) saying they will drag landlords to the table if they need to.