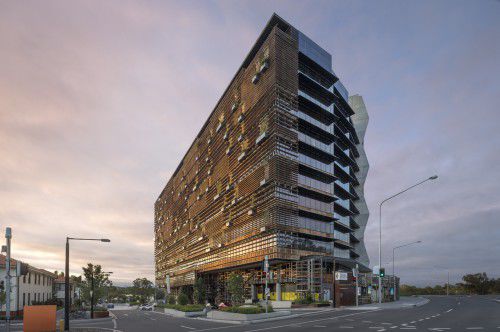 THE New Acton Precinct reports on facebook that they’ve taken out the “International Project of the Year” category at the Building Awards held in London.

Holy moly. Nishi just won INTERNATIONAL PROJECT OF THE YEAR at the 2015 Building Awards in London. Congratulations to the team behind this world-class project.

UPDATE: The Molonglo Group have had this to say about their big win:

The much-loved Nishi building in NewActon, Canberra, has won International Project of the Year at the 2015 Building Awards in London overnight.

The award was presented to the project team by renowned comedian David Walliams (of Little Britain fame) in the lavish ceremony at the Grosvenor House Hotel in London.

This award cements Nishi as a truly world-class building, beating competition from a strong field of buildings around the world, putting Canberra on the map again for all the right reasons.

The Building Awards is the UK construction and building industry’s longest-running and most prestigious recognition of excellence. Showcasing the best in all areas of construction, 21 awards went to the best and most innovative buildings, teams and individuals of the past year.

The award submission focussed on not only Nishi’s irrefutable sustainability credentials, but also the enduring cultural programming in the building since it has opened, and the strong focus on design and artist involvement throughout the creation of the building. The building design engineers Arup led the submission from their London office.

Molonglo Group’s Development Manager, James Bichard, who has worked on the project for five years, paid tribute to Canberra’s role in cementing the win for the project team.

“We’re all thrilled!” Mr Bichard said. “This award, coming from London, is a really exciting addition to the recognition we have already received from within Australia. We drew heavily in the submission on the cultural programming in the building since it has opened, and the way Canberra has warmed to the building on social media, hoping that by revealing the beating heart of the project we would beat out the competition… and it worked! Canberra’s love for the building shone through to the London jury.”

The 2015 Building Awards jury has not yet commented formally on the award winners or updated the Building Awards website. Molonglo Group will update this media release as more information emerges from London.