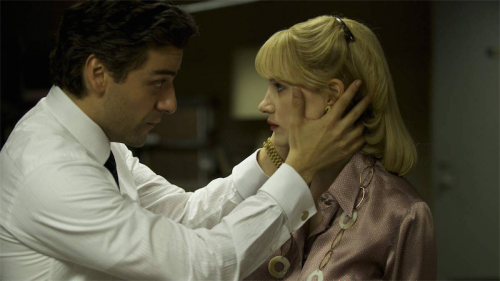 IN 1981, Hispanic businessman Abel (Oscar Isaac) signs a contract to pay $1.8 million for a business that will lift him into the select tribe of New York businessmen selling heating oil to a snow-covered city.

If Abel doesn’t pay in 30 days with no extension, the deal is off, the deposit forfeited. A weaker man than Abel might run away from such conditions. But Abel, about to move with three daughters and gorgeous wife Anna into a new up-market home, reckons he can meet them.

Writer/director J. C. Chandor begins piling obstacles in Abel’s path by hijacking one of his tankers and putting driver Julian (Elyes Gabel) into hospital. From that point, the film confronts Abel with broken promises, violent confrontations, the impending service of summonses for commercial crimes and domestic conflicts that, while they test Abel’s resolution, fail to overwhelm it.

Anna, a mobster’s daughter who’s seen criminal behaviour close up and understands how it functions, is a ferocious defender of home, family and the business, an electrifying performance by Jessica Chastain. Albert Brooks plays the firm’s loyal CEO. Sitting on the fence is FBI agent Lawrence (David Oyelowo) who perceives Abel’s strong moral foundation and is prepared to wait for matters to develop.

As the deadline approaches, the film delivers inexorable tension without hysteria or hyperbole, a paean to the American business ethic that, if you think about it, is probably little different from that of anywhere else.

At Palace Electric, Dendy and Capital 6