FOR the ninth consecutive year, dance students from tertiary institutions across Australasia have descended on Canberra to participate as choreographers and dancers in an intensive two-week workshop hosted by QL2 Dance. 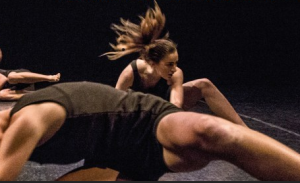 They are joined by current Quantum Leapers who participate as dancers.

At the end of the two weeks, the choreographers are expected to produce a short work for presentation before a paying audience, for which they are provided with dancers, a mentor, and studio space for 18 hours of rehearsals, and technical support.

This year 13 young choreographers contributed works ranging from solos to those involving up to seven dancers. The choice of subject matter was interesting with some setting themselves very high bars by choosing difficult abstract topics to investigate in dance terms. Two choreographers were inspired by water, and water figured prominently in a short film “Soft Flux” by Adelaide College of Arts student, Alana Stenning, which commenced the program.

Another WAAPA student, Anneliese Kirk, costumed her six dancers in pretty party frocks for her piece, “We’re not here for objectification”, in which she incorporated passages of well executed unison movement to explore the concept of individuality.

Working with four dancers, University of NSW student, Maddy Towler-Lovell, tackled the subject of abstract art with her work “All the Authors of Meaning”, which contained many lovely moments, particularly during a series of duets which commenced with one partner holding the others’ head in their hands. Its meaning however, remained determinedly abstract.

Similarly, Victorian College of the Arts student, Rachael Wisby, who tackled climate change with her work “What Happened Here”, let her audience draw their own conclusion as her five dancers, all costumed in attractive grey silk overalls, performed robotic movements around a green grass mat.

NZ School of Dance student, Samuel Hall incorporated mobile phones, and an impressive use of stillness, to create a powerful work, “Put me on the Internet, even on the Google” , which climaxed with his five dancers sitting in grief over an image of a displaced Pakistani woman and her child.

Equally powerful was “State”, created by Ryan Douglas Stone, a former Quantum Leap dancer now studying at WAAPA, who costumed his five dancers in black hoodies, and utilised music by Ben Frost, and the sounds of baying dogs, to create a sometimes violent work questioning the control over life by the state.

Perhaps the most ambitious work of the evening was by another former Quantum Leaper, now studying at the Victorian College of the Arts, Oonagh Slater. For her work, “Petal by Petal; They Would Open Up Unfolding”, Slater created the setting, costumes and soundscape, and made imaginative use of the studio windows, spoken word and bird sounds, to create a moody, abstract work for four dancers exploring vulnerability.

Also studying at the Victorian College of the Arts, and also another former Quantum Leaper, Luke Fryer , ceased the opportunity to explore his ability to create interesting movement with his attractive abstract work “It is what it was” for which he used four tunic clad dancers and incorporated voice sounds and well-executed unison movement.

The only solo of the program was an exquisite work, “You Don’t Have to Pretend; You Don’t Need to Pretend, created and performed by National Institute of Circus Arts student, Amanda Lee, to the music of Ezio Bosso’s “Bitter and Sweet”, for which Lee combined her astonishing acrobatic skills with her equally impressive dance technique to create a memorable solo exploring self -image.

The final work of the evening, which also provided the perfect finale, was “This Tan is Real” created by NZ School of Dance student, Holly Newsome utilising the talents of four dancers and a witty soundtrack which combined music by Chopin, Holly Henderson and Flux Pavillion for a delightfully quirky exploration of “the Smile”.