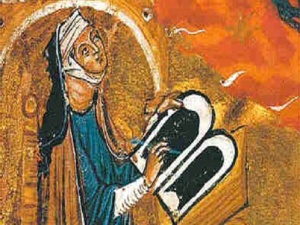 She established a nunnery and became a writer, penning hundreds of letters along with books on religion and science. She also wrote poetry and music. On top of all that, she was a preacher of some note and in the thick of religious politics.

Von Bingen’s many visions inspired much of her writing, including the work performed at this Festival, “Ordo Virtutum” (“The Order of the Virtues”), described as a “morality play”. We might also consider it a kind of liturgical drama set to music.

The story is simple. The Virtues are introduced to the Patriarchs and Prophets. A group of souls, imprisoned in human bodies, repent their sins. One of them, Anima, wants to bypass life and head straight off to heaven, but the Virtues say this isn’t on. Just to make it more interesting, the Devil tries to seduce her. So then it’s on for young and old. Needless to say, the Virtues defeat the Devil, accept Anima and her penitence and praise God.

The work, in five parts, is sung in Latin in ancient chant style, all in one key but with some strange harmonies (a lot of them in fourths) and requiring wide vocal ranges. There is no melody as such nor is there much in the way of instrumental accompaniment, so the task of singing the work is quite challenging.

So how did our 21st century singers go? In a word, brilliantly.

Pitch accuracy is the key to success in a work like this. The largely a cappella, almost monotonic, music line and a dead steady rhythm and tempo all go to make this even harder to maintain. And an even higher level of difficulty is presented by the need for “straight” singing, i.e. with no vocal vibrato. The group and soloists remained true to pitch all the way through. A few singers had a tiny bit of vibrato here and there, but overall their vocal control was superb.

The ensemble balance was perfect and the acoustic of the Fitters’ Workshop enhanced that balance beautifully. Ensemble and solo voices carried effortlessly through the large room, with fabulous clarity from all points (and yes, singers moved from one end to the other, even singing in the middle, at various stages of the work).

Even with the deadpan music line and the unbending tempo, soloists were able to convey the drama of the work. The Devil (Clive Birch) had a spoken part, beguiling the audience with his humorous portrayal of his sinister role. Anna Fraser, in the lead role as Anima, The Soul, gave a heart-wrenching performance and the reassuring Hannah Fraser, as Humility, Queen of the Virtues, was as comforting as her voice was beautiful.

A performance of music written 1,000 years ago was a new experience for me and I was as enthusiastic as the rest of the capacity audience in its extended applause for this very fine presentation.

Kate Meikle - June 2, 2020
0
"It’s hard not to minimise the hardship she genuinely feels over the sequence of brushing teeth and combing her hair being out of order to her, and the screaming it produces when we get it wrong," writes "Mummy" columnist KATE MEIKLE as her "boss baby" turns four.