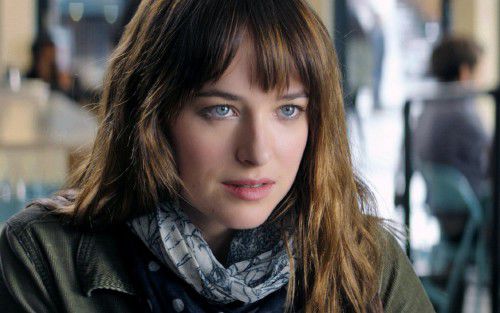 Sam Taylor-Johnson’s second feature (in 2009 I gave three and a half stars to her bio-pic “Nowhere Boy”, recounting John Lennon’s childhood before becoming a Beatle) looks elegant. But that’s pearls before swine.

A goodly portion of the film’s 129 minutes involves billionaire entrepreneur and control freak Christian Grey (Jamie Dornan) persuading undergraduate Anastasia (Dakota Johnson), a virgin in her early twenties when the story begins, that she will come to realise that the pain she feels from his ministrations is really pleasure. I suspect that Grey’s money, his only redeeming feature, is her real reason for putting up with hm. Her writhings and mewings fall short of those characterising orgasm, dishonouring the desideratum that the woman’s need should come first.

Kelly Marcell, whose career began with adapting a famous X-rated movie into a stage musical, has taken the easy way with the screenplay. Short on dialogue. Little exploration of motivation. Plot credibility that’s hard to believe. Characters struggling to achieve two dimensions.

The film ends with a horrifying portent. There are two more volumes in the trilogy.

At all cinemas, two screens in some!

CityNews - April 14, 2021
0
The sooner we're all vaccinated against COVID-19, the better but don't panic, says MICHAEL MOORE. "Australia is in good stead thanks to the preventive measures taken by our range of governments."