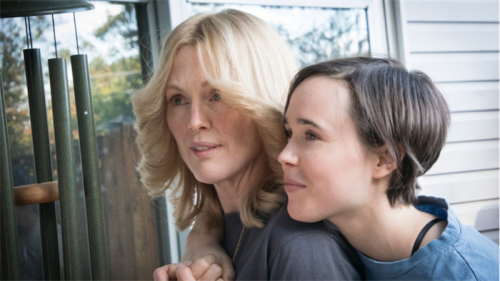 IN June, the US Supreme Court held that the Constitution guaranteed equal protection under US laws, in effect validating marriages between two people of the same sex.

A direct juridical line leads back from that ruling to the story of Laurel Hester (Julianne Moore) for 23 years a police detective in Ocean County, New Jersey, concealing her sexual orientation for fear of jeopardising her promotion prospects, and her 19-years-younger partner Stacee Andree (Ellen Page), a motor mechanic untroubled by her’s.

In Peter Sollett’s film, Ron Nyswaner’s screenplay follows the couple’s loving relationship until Laurel, a heavy smoker, was diagnosed with lung cancer in 2008. Under New Jersey law, they had been able to have their relationship formally recognised. Laurel asked the Ocean County Council to declare Stacee to be the beneficiary under her pension rights.

Five men owning freehold land in the county and thus qualified to be councillors, denied Laurel’s application. In 150-odd years the council had never recorded a dissenting vote. The bulk of the film devolves to the campaign, started when a provocative headline in the local paper led Jewish gay activist Steven Goldstein (Steve Carell) to mobilise a populist confrontation with a council influenced by tradition more than sound argument against its denial of Laurel’s application.

The two women’s relationship glows with the joy of sharing their lives like any other couple. “Freeheld” gets gently physical in the bedroom without becoming salacious and depicts its forensic and political issues with broad brush strokes. Julianne Moore and Ellen Page give fine performances. Even before things go pear shaped, the film is intensely emotional. By any measure, those are good reasons to see it.

Helen Musa - April 1, 2020
0
FORCED to shut his physical gallery in Kingston because of COVID-19, Canberra photographer and gallery owner Scott Leggo has launched a new online product to help people in home isolation.