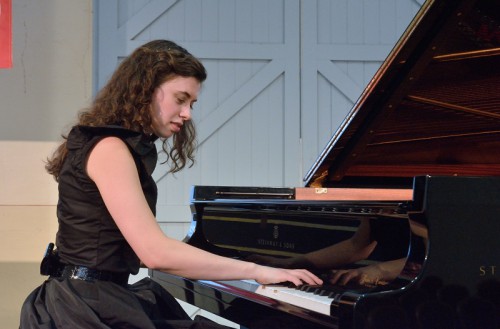 BY the end of the first piece in the penultimate concert in the 7-concert series of Beethoven’s 32 piano sonatas at the Canberra International Music Festival, I knew it was going to be the best.

My prediction was spot-on. That’s not to say the last was a fizzer, but it was the 6th that really got the juices going.

Ian Munro started the 7th concert, playing Op 7 (1797) “Grand Sonata”. His technique was fluid and effortless but he seemed to play the notes almost as if it was just another day in the office. His interpretation seemed subdued and lacking in vitality, especially in the second movement, marked largo, con gran espressione, where the expression overall was a little flat.

Then, appropriately as the full moon was rising above the Fitters’ Workshop, Kotaro Nagano, making his third appearance in this cycle, gave a brilliant account of Op 27 No 2 (1801), which we know and love as the “Moonlight”. In the famous first movement in particular, marked Adagio Sostenuto, Nagano showed deep feeling and great sensitivity, which flowed through into the remaining two movements, drawing a well-deserved standing ovation. It was the best of his three performances.

Maria Mazo finished the last concert with Op 106 (1819) “Hammerklavier”, “hammer” being the operative element in this performance. This work surely is the most technically challenging of Beethoven’s piano sonatas and Mazo handled it brilliantly. But as was the case in her first appearance at the Festival playing the “Appassionata”, she was way too heavy-handed, often giving the piano an unforgiving pounding. The Scherzo movement, which is supposed to be playful and light, rather was strident and bombastic. It was showy and thrilling and many in the audience leapt to their feet at the end. But even in the slow, soft sections of this piece, while showing glimpses of sensitivity and feeling, Mazo seemed on the whole to force the notes into the keyboard bed.

Twenty-one year-old Adam McMillan took to the platform first, with Op 2 No 3 (1795), Beethoven’s sonata number 3. His was a thoroughly mature reading with some wonderful light and shade, a lightness of touch perfectly suited to the time and style of this composition and excellent control of the dynamics. The rhythmic 4th movement, Allegro assai, in particular was delightful and charming.

Clemens Leske was next, making his second Festival appearance, this time with Op 10 No 3 (1798). This, too, was a brilliant performance. Leske created plenty of drama, with just the right contrasts in tone and volume. Once again his control of crescendos and diminuendos is a lesson for every piano student and many performers. In particular, his playing of the second movement, marked Largo e mesto (slowly and mournfully) was heart-wrenching.

Daniel De Borah opened the second half of the concert with Op 27 No 1, written in the same year as the “Moonlight” and titled “Sonata quasi una Fantasia”. So the work is more in the style of a fantasy than a classical sonata. It was no surprise that De Borah would play the work with great sensitivity and style, with a very fluid technique and much heart-felt expression. He has an innate ability to connect himself to the music and the mind of its composer. His playing, especially of the third movement, marked Adagio con espressione – Allegro vivace – Presto showed this remarkable quality to the full.

Finishing this second-last concert was Stephanie McCallum, with Beethoven’s Op 53 (1803), nicknamed “Waldstein”. McCallum’s performance of this work, written early in Beethoven’s so-called “heroic” decade, quite simply was incredible. Without any doubt it was the most outstanding performance of the entire cycle of the 32 sonatas presented during the Festival. McCallum’s playing style is so fluid her hands seem to float across the keyboard. She can deliver sounds so soft there’re almost inaudible, and yet she is able to summon up the most assertive expression and phrasing, never overdoing it and always remaining true to the emotion of the piece. McCallum was brilliant in every aspect of her performance of this work and drew a standing ovation, without doubt the most deserving of all those given during the cycle.

So, there you have it – 32 works of one of the most brilliant composers who ever lived, Herr Beethoven. It was an outstanding cycle of music, presented in a beautifully prepared space on a magnificent instrument by a wonderful array of artists. Thank you to Roland Peelman and the Canberra International Music Festival for this once-in-a-lifetime event.